The coalition of 14 Feb youth revolution denounced the American Administration crime against al-Hashid al-Shaabi (popular mobilization forces ,PMF) when it bombed one of its sites at the Iraqi –Syrian borders on Monday ,17June 2018 ,which led to the martyrdom of a number of its fighters and several wounded . 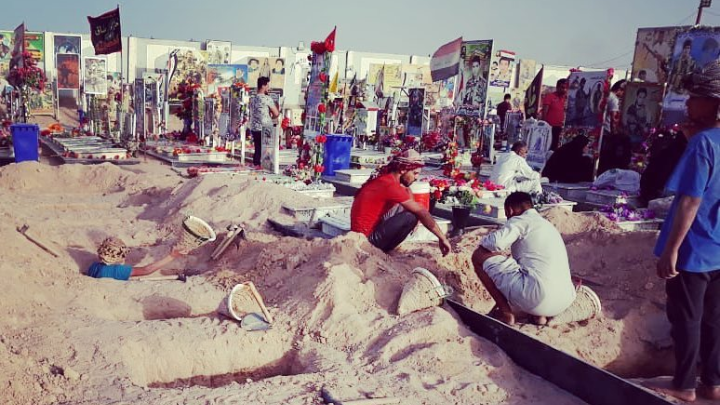 The coalition of 14 Feb youth revolution denounced the American Administration crime against al-Hashid al-Shaabi (popular mobilization forces ,PMF) when it bombed one of its sites at the Iraqi –Syrian borders on Monday ,17June 2018 ,which led to the martyrdom of a number of its fighters and several wounded .

In a response to the explanatory statement issued by the PMF concerning this heinous crime , the 14 Feb coalition has declared on Tuesday ,19 June 2018,that this massacre is a repeated version of the crime in the 17th ,August ,2017 ,when the US had targeted the sites of Syed al-Shuhadaa's brigades ,and it alleged that it thought these sites are belonging to the terrorist groups of Daish (ISIS)

It said that this criminal step by the American Administration which caused the death of more than 20 martyrs and many wounded reveals its adherence to back up the terrorists ,and it shows the American lies of fighting the terrorist groups which have been founded and financed by the Gulf regimes , and mainly by the terrorist regime of al-Saud .

Furthermore ,the coalition affirmed that the Zionist and US forces known exactly the locations of the terrorist groups and the sites of al-Hashid al-Shaabi (PMF) ,but it instead had carried out this brutal crime I revenge of the victories made by al-Hashid al-Shaabi against the remnants of the armed terrorist groups in Iraq and Syria ,as it has thwarted the American arrogant and destructive projects in the region . It pointed out that the victories of the (PMF) do not satisfy the US Administration at all since they foiled the plan of the US to have a military presence and to get control over the Iraqi lands .This Administration is suffering from the failure of its bloody scheme in Yemen and the victories of the Yemeni army and the popular committees and their successes .

The coalition added that this crime is coming within the context of the diminution of the Iraqi people's sovereignty and their independence of political decision ,and that is totally unacceptable .It also urged the Iraqi people to escalate the demands that reject the existence of the American presence on every foot of the Iraqi territories ,and they should understand that the objectives of this heinous crime is to enable the terrorist groups and organizations to extend its control on the Iraqi lands and to commit the most horrific terrorist crimes against the innocent Iraqi people again .

Meanwhile ,the coalition of 14 February had sent in its declaration ,the deepest condolences and consolations to the whole Iraqi people for the martyrdom of al-Hashid al-Shaabi's fighters ,who have been died in the Zionist –American air- strike on the 45,46 brigades.