“In the name of Allah the Merciful and Compassionate”

In a serious precedent, al-Khalifa regime has invited four Zionist spokesmen to participate in the World Entrepreneurship Conference (2019), which will be held in Manama from April 15 to 18 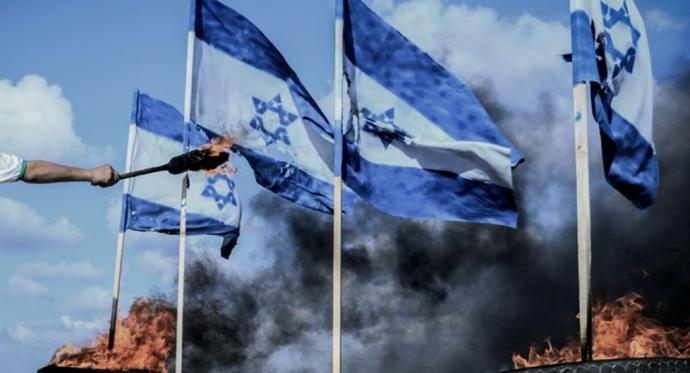 "In the name of Allah the Merciful and Compassionate"

In a serious precedent, al-Khalifa regime has invited four Zionist spokesmen to participate in the World Entrepreneurship Conference (2019), which will be held in Manama from April 15 to 18.

We, in the Coalition of February 14 are deeming the invitations of Zionists to participate in a conference that holds in Bahrain is a crime and a blatant infringement on the popular will that refuses to normalize relationship with the Zionist entity, and we affirm the following.

First, Al-Khalifa regime is a system that lacks legitimacy and does not represent in any way the popular will that demands the toppling of this regime . Therefore, its invitation for the Zionists to participate in a conference in Manama is a crime that can be added to the record of its multiple crimes, including the usurpation of power, legitimacy and monopoly of resources.

Third: The intention of al-Khalifa's illegitimate regime to invite Zionists is the last mask of its real role in the implementation of the crime of normalization with the occupying Zionist entity and the usurper of the holy and sacred land of our Arab and Islamic countries. It shows its standing in the first row to implement the crime of normalization with the Zionists and selling the holly Quds to them.

Fourth: The attendance and participation in a conference by an entity that occupies, kills and executes dozens of horrific massacres against citizens who live on their land, is a partnership in all these crimes, and will not be accompanied by any justification to cover this matter.

From here, we in the Coalition of February 14 salute every free voice by our people in Bahrain, which rejects all forms of normalization with the Zionist entity, and demand their departure from our dear homeland, and we refuse to recognize the Zionists existence on our holy land of Palestine.

We stand by all honorable and free people in the world who refuse to impose the Zionist occupation of Palestine as a reality. We call for boycotting the Zionists in any way, and not to respond to attend and participate in the alleged conference which comes under the guise of entrepreneurship while it is aimed primarily at the implementation of the crime of normalization with the Zionist entity. We also salute the personalities and delegations that announced their refusal to participate in a conference in which the Zionist entity will be represented.

We call on our dear people in the land of Bahrain to stand united with all calls to reject the visit of the Zionist delegation and to work with all force to thwart the plans of the entity in the implementation of the crime of normalization and confront it by all legitimate means. We announce in this context the preparations for launching the event of the week "Stop the crime of normalization", starting from April 9th.