On Monday ,June 20 ,2018 ,the decision of al-Khalifa entity to revoke the citizenship from the biggest religious authority in Bahrain ,His Eminence ,leading scholar Sheik Essa Qassim was not to pass easily in a country that exalts the scholars and heightens their prestige. 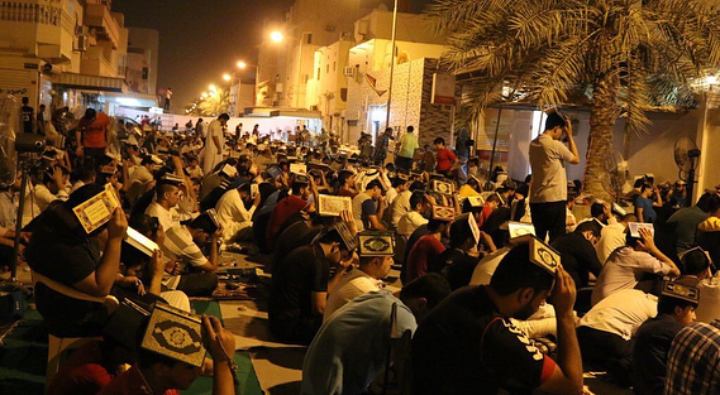 On Monday ,June 20 ,2018 ,the decision of al-Khalifa entity to revoke the citizenship from the biggest religious authority in Bahrain ,His Eminence ,leading scholar Sheik Essa Qassim was not to pass easily in a country that exalts the scholars and heightens their prestige.

You ,the youth ,old people ,children and women from all regions of Bahrain had come to the courtyard of His Eminence's house in the February ,11, 2011 ,and as if that date is repeating itself when they slept on the ground ,and it became the square of redemption and sacrifice for the free and honorable turban .It was called (the field of redemption ) by coalition of 14 Feb youth revolution .

From time to time ,al-Khalifa entity was trying to reach the house of His Eminence ,where the armored vehicles of its mercenaries were approaching the square and the sacrificing masses have risen to protect it , wore coffins and ready to protect it by their souls and they filled the place with the magnifications for Allah and revolutionary slogans.

The Fedayeen (guerilla) were stationed for months , unaffected by hot or cold weather and their slogan was (We die for you, Abu Qassim) until January 26,2017 ,when the armed gangs of al-Khalifa entity launched a terrorist attack on the square and shot at young- men and citizens .They martyr (Mustafa Hamadan ) was shot and taken to the hospital unconsciously until he died on Friday ,24 March 2017 .

Thousands of the steadfast people in the field redemption were participated on Saturday ,25 March 2017 ,at a special wedding ceremony in the honor of the martyr ,the Fedaee (struggler ) Hamdan . They marched in an honorable candlelit procession ,raising his pictures , chanting with reprisal slogans upon the killers and confirming that they will continue the path of resistance and the self –sacrifice for the sake of His Eminence ,the Faqih (scholar ) Ayatollah Qassim .

A year later , after the Husseini resistance continued in (the square of redemption ),al-Khalifa entity has no longer calm down unless it crushes the field even if it has to shed bloodbaths . Al-Khalifa gangs ,supported by the occupying Saudi army attacked the square again in May 23,2017 .The Fedayeen confronted them with coffin chests and their bare hands ,where 5 people died and dozens wounded .The house of His Eminence was heavily besieged and that was a rare historical event that lasted for more than a year of unique heroisms, glorified resistance and honorable martyrs.

On the anniversary of al-Daraz's massacre ,the collation of 14 Feb youth revolution is sending its greeting and peace to the martyrs of the redemption (Mustafa Hamdan and his brother Mohammed ,Mohammed Zain al-Din ,Mohammed al-Sari ,Ahmed al-Asfur and Mohammed al-akri