On Friday, June 3, 2022, a popular movement was witnessed in a
number of regions in solidarity with the political detainees under 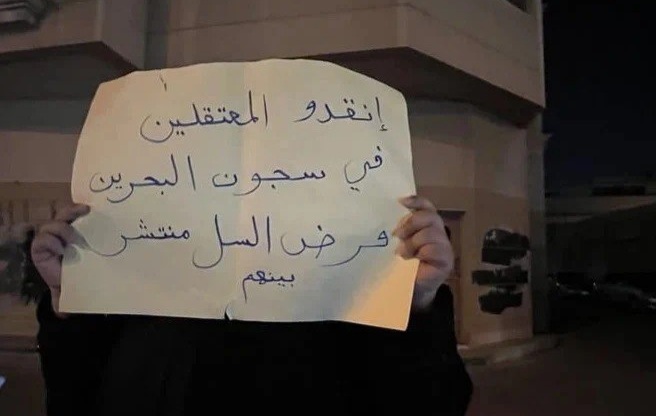 On Friday, June 3, 2022, a popular movement was witnessed in a
number of regions in solidarity with the political detainees under
the growing fears about the outbreak of the infectious disease
(tuberculosis) which it was confirmed that a number of them had
been infected.
In this context, the village of Al-Sanabis, which embraces the daily
sit-in of the people, witnessed an angry march. The detainees’
families in the capital of the revolution “Sitra” and the towns of
“Al-Malikiyah, Al-Diraz, Damistan, Ma’ameer, Karzakkan and
Al-Dair” also held sit-ins calling for the immediate release of the
political detainees after the spread of tuberculosis in prisons, they
also affirmed their solidarity with the two detainees sentenced to
death in Saudi prisons “Sadeq Thamer and Jaafar Sultan” and
their rejection of the unfair death sentences.
The revolutionary slogans affirming the prisoners’ right to
freedom, rejecting normalization and upholding the central cause
of Palestine were written on the walls of the towns “Al-Markh and
Al-Maqsha”.
The Ministry Health in Bahrain had acknowledged the spread of
tuberculosis in Al-Khalifa’s prisons, claiming that there is only one
infected person and he’s stable and undergoing the necessarily
treatment and medical care, and that it is doing the necessary
tests precautionary on the rest of the people sitting with him to
check on the health situation in general, while jurists affirmed that
the number of confirmed people infected with tuberculosis is two,
with a suspected third case, in addition to the editor “Ahmad
Jaber Radhi”.
It should be noted that Amnesty International has expressed its
deep concern about the regime’s gross negligence of tuberculosis
“cases” among the detainees of Jaw prison.