During the holy month of Ramadan, a new Saudi-Emirati massacre in the Sudanese capital of Khartoum was committed , where 30 people killed and hundreds  wounded . 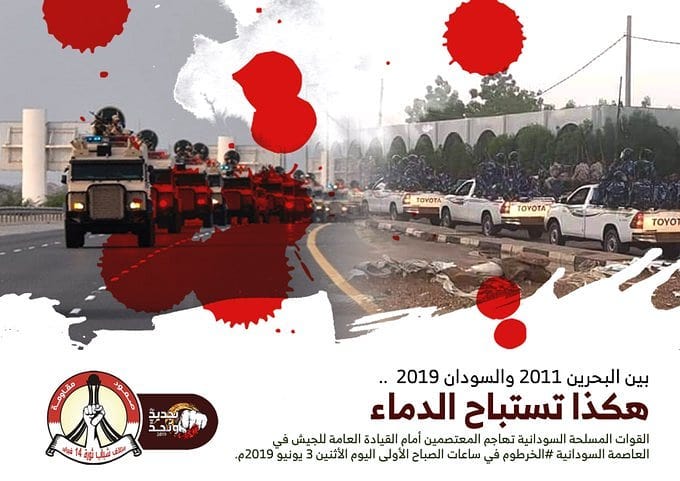 In the name of Allah the Merciful and Compassionate

During the holy month of Ramadan, a new Saudi-Emirati massacre in the Sudanese capital of Khartoum was committed , where 30 people killed and hundreds  wounded .

The horrific massacre committed by the military junta during the attack on the peaceful sit-in, where dozens of protesters were killed ,would not have been possible without the green light and the Saudi-Emirati cover and the international community’s disregard for the just demands of the Sudanese people. This brutal massacre confirms in its form, content and timing that the enemies of freedom and democracy in the Gulf and the world, led by Mohammed bin Zayed and Mohammed bin Salman are the political and material instigators of this massacre in Ramadan, and the Military Council is only a cheap and lawless executive tool.

We, in the February 14 Revolution Youth Coalition declare that we stand by the brotherly Sudanese people at these crucial times and the sensitive circumstances. We affirm our full and absolute solidarity with the freedom movements in Sudan and support every free and honorable Sudanese, and encourage them to continue their steadfastness. The Leadership Square massacre in Sudan in 2019 is as the same as the massacre of the Pearl Square in Bahrain in 2011, and only differs  in place and timing. It is the same bullet , aggressor and enemy.

We hope that the Sudanese revolution will triumph over the current regime of al- Bashir and its current agents, and the dream of every Sudanese will be realized through a bright future and eternal dignity. We hope that Bahraini people will prevail over the tyranny of the Al-Khalifa, Al- Saud and Al-Nahyan soon.