The 14 February Revolution Youth Coalition has published a set of general instructions and guidelines regarding the steps of the “Civil Resistance” within the activities of ” Your departure is inevitable” on the eighth anniversary of the glorious revolution. 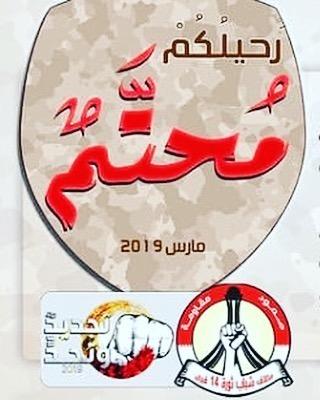 The 14 February Revolution Youth Coalition has published a set of general instructions and guidelines regarding the steps of the "Civil Resistance" within the activities of " Your departure is inevitable" on the eighth anniversary of the glorious revolution.

It explained on its accounts of the social media sites that these steps allow all members of the society, elderly, young men, women and children to participate in it, stressing that the leading role of students in the revolution is an important element of its success and progress, and the strike on the study on Thursday, March 14 2019 will be a message against the Saudi – UAE occupation.

The Coalition said that the independence and sovereignty of the country requires sacrifice and redemption, calling on everyone to participate in the steps of the declared civil resistance, which comes into force from Wednesday evening March 13, 2019.

The Coalition added that while it is saluting the stores' owners for their honorable positions, it is stressing the importance of their role in the steps of the civil resistance, which includes the closing of their stores from Wednesday evening "Thursday night" March 13, 2019 «8:00 pm», until the evening of Thursday 14 March 2019.

It announced that among the steps of the civil resistance is to take the streets and demonstrate in the squares, which is an important step of the civil resistance, recommending the heroic revolutionaries to close some of the main ports and sub-regions as a precautionary measure to reduce the infiltration of mercenaries.

The Coalition stressed the vital role of the media and other citizens in keeping up with the events of the ominous anniversary of the Saudi-UAE occupation, looking forward to a multiplier role by them in covering the event, as the issue of Bahraini people is fair and legitimate. The occupation is unjust and its survival is illegal and contrary to international law, stressing that the departure of the Saudi-UAE forces from Bahrain is inevitable, as these occupying forces cannot remain amid the refusal of the people.

In conclusion, it called on everyone to pray for the preservation of the resistance and the glorious revolution.