The 14 Feb youth revolution coalition has affirmed in its speech during the oratorical festival which held at the Bahrain’s martyrs exhibition and axis of resistance on Wednesday, 8, November 2017 that it will persist on maintaining the Husein’s resistance path to confront the oppressors and tyrannies. 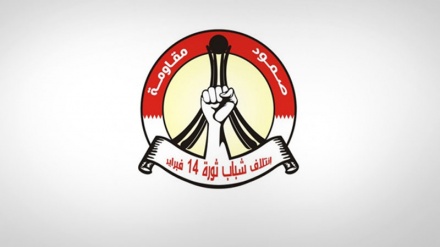 The 14 Feb youth revolution coalition has affirmed in its speech during the oratorical festival which held at the Bahrain's martyrs exhibition and axis of resistance on Wednesday, 8, November 2017 that it will persist on maintaining the Husein's resistance path to confront the oppressors and tyrannies.

It also renewed its vow to memorize their dignified martyrs stands and stressed on the continuation of the Bahrain's uprising which has broken out since the year 2011 and not to turn back whatever the sacrifices are.

The coalition pointed out that the declarations of the Khalifa's entity embassy in Baghdad over the exhibition are only revealing its weakness and they heighten the Bahraini people's will of continuing their revolutionary activities and other different actions inside and outside Bahrain.

"Iraq is a country which has a big amount of freedoms which exceed all the freedoms of gulf countries together, it does not hide its good relations with many Iraqi political powers, military mobilization groups and Iraqi governmental officials" the coalition added.

It also pointed out that the Bahraini people will not be alone in its war against both Saudi and Khalifa's state terrorism.

The collation demanded in its statement to boycott the artificial elections due to be held in 2018 totally and actively too.

The Bahraini people can not give any legitimacy to an oppressive regime that killed, violated, arrested and committed awful crimes against it, the statement concluded.

"we have tackled the confusion of participating and boycotting the elections since our objectives and aims are bigger than this issue, but we warning at the same time from falling in any misleading and half-solutions tricks that encouraging people to take part in this artificial elections which come to root the oppressive rule" it added.

The coalition called on people to be aware enough and to reject Khalifa's elections and to get ready for the coming important steps which will be announced to resist the elections and its consequences.

It asked the international community to hear the voice of the people which has been shown through their participation in the public poll and their willingness of building a new political system and deciding their self rule.

The coalition concluded its statement with paying attributes to everyone who has taken part in the success of the Bahrain's martyrs exhibition and the axis of the Bahraini resistance.

It particularly praised the anonymous soldiers who were working day and night for achieving all technical and logistic necessities in this site, every movements and military groups which have sent their delegations in to the exhibition, especially the representative of the leader, Imam Sayed Khamenei(God bless him) delegation's head to Iraq, His eminence, Huja of Muslims and Islam Sheik Najafy Rohany ,the entire satellite channels and various mass media which have attended and covered the whole activities.