On Saturday the 18th of October 2014, the Coalition feb14 launches a new bunch of revolutionary activities under the slogan of “ People Decided … Referendum” 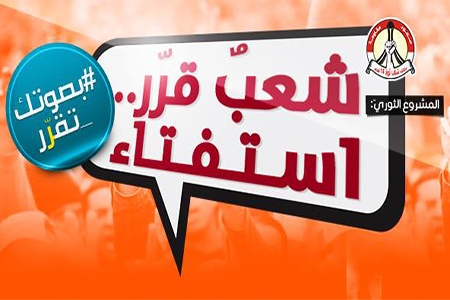 On Saturday the 18th of October 2014, the Coalition feb14 launches a new bunch of revolutionary activities under the slogan of “ People Decided … Referendum”
Within this bunch of activities, several feminist demonstrations will kick off on the Wednesday the 22nd of October 2014 in Salmabad, Bilad Al – Qadeem and north Sehla. Plus, in Malikiah there will be the second tactical gathering as a support to the people referendum and as a rejection on the sham elections that Al – Khalifa rule intends to conduct during the coming November.
Also, there will be invocation evenings held in Al – Hajar and Al – Grefah and Mahooz humility to Allah to heal the wounded and the salvation of the prisoners and save the rebels and fugitives along with the activities of the revolution Al – Mihrab, which will be held on the next Saturday the 25th of October 2014 as a victory for Allah's houses / Mosques that were destroyed by the mercenaries of Al – Khalifa system and Saudi conqueror.
In a statement issued in this regard, the coalition feb14 kept on the next Friday the 24th of October 2014 a slogan of “Friday of Imam Hussain … The rebellious role model”, where a central demonstration will be launched amid Al – Hamala village adherent to the Imam Hussain path in fighting Yazeed of the current era Hamad bin Isa.
In Bani Jamra (west of the capital Manama), the coalition called the Bahraini masses of pride to revive Ali Sabbagh Martyr's Day on Tuesday the 21st of October 2014, to commemorate the martyrs and their families in honor of their sacrifices and generosity. مصدر : On Saturday the 18th of October 2014, the Coalition feb14 launches a new bunch of revolutionary activities under the slogan of “ People Decided ... Referendum”