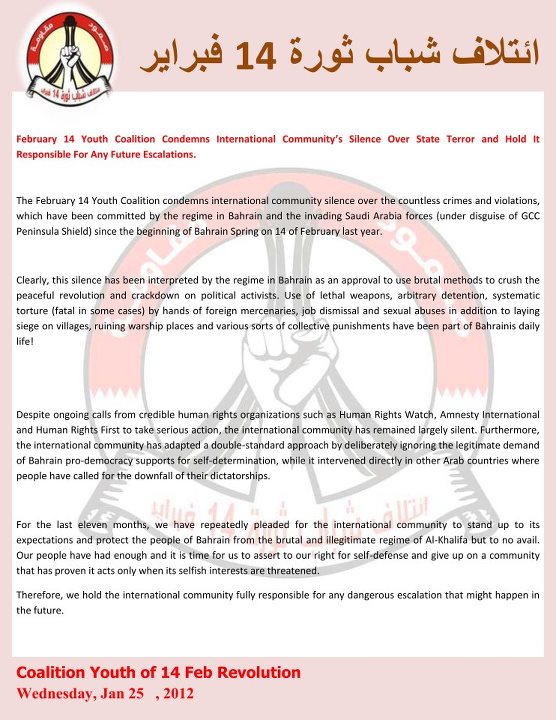 The February 14 Youth Coalition condemns international community silence over the countless crimes and violations, which have been committed by the regime in Bahrain and the invading Saudi Arabia forces (under disguise of GCC Peninsula Shield) since the beginning of Bahrain Spring on 14 of February last year.

Clearly, this silence has been interpreted by the regime in Bahrain as an approval to use brutal methods to crush the peaceful revolution and crackdown on political activists. Use of lethal weapons, arbitrary detention, systematic torture (fatal in some cases) by hands of foreign mercenaries, job dismissal and sexual abuses in addition to laying siege on villages, ruining warship places and various sorts of collective punishments have been part of Bahrainis daily life!

Despite ongoing calls from credible human rights organizations such as Human Rights Watch, Amnesty International and Human Rights First to take serious action, the international community has remained largely silent. Furthermore, the international community has adapted a double-standard approach by deliberately ignoring the legitimate demand of Bahrain pro-democracy supports for self-determination, while it intervened directly in other Arab countries where people have called for the downfall of their dictatorships.

For the last eleven months, we have repeatedly pleaded for the international community to stand up to its expectations and protect the people of Bahrain from the brutal and illegitimate regime of Al-Khalifa but to no avail. Our people have had enough and it is time for us to assert to our right for self-defense and give up on a community that has proven it acts only when its selfish interests are threatened.
Therefore, we hold the international community fully responsible for any dangerous escalation that might happen in the future.