The February 14 Revolution Youth Coalition revealed in numbers the fraud in the regime’s elections on several levels. 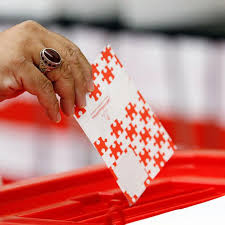 The February 14 Revolution Yout Coalitionrevealed in numbers the fraud in the regime’s elections on several levels.

The Coalition published an ‘’infographic’’ entitled ’’Deciphering the Regime Elections Numbers in Bahrain- 2022’’, in which it showed contradiction and fraud according to the official statistics on invalid votes, explaining that according to the official numbers, the invalid votes are as follows: ‘’251,640 – 233,231 = 18,409 votes’’, while the regime states that the invalid votes are: ‘’15,707 votes’’. Therefore, the result is that ‘’2,702 votes’’ weren’t included in the valid or invalid votes, this is a grave mistake reveals fraud that weren’t properly thought out by the regime.

Regarding the politically isolated bloc, the Coalition said that the grand total of the electoral bloc is ‘’442,713 votes’’, the total of the declared electoral bloc is ‘’344,713 votes’’, the officially announced number of participants is ‘’251,640 votes’’ and the total political isolation bloc is ‘’98,000’’. So, the result is that the participant rate, with the calculation of the politically isolated bloc is 56.84%, while the total number of fraudulent votes is ‘’82,190 votes’’ used to raise the participation rate and support candidates against their competitors. Therefore, the actual percentage of participants in the regime’s elections is: 38.28 %.

Note that the ‘’News Center’’ published a special report on Saturday, 12 November, 2022, that independent observers and activists with private internal sources were able to bypass the ban on covering the regime’s elections and concluding important information about the reality of the electoral process, stating that the regime had closed the polling station without any extension due to the lack of the voters in the centers; ; also, some public centers did not witness a noticeable voter turnout and were ‘’empty’’ and ‘’almost empty’’, while heavy participation of naturalized citizens and members of the army was observed in these centers, ‘’mostly’’ flocked in the afternoon in convoys that were ensured before the centers were closed, especially ‘the public center at King Fahd Bridge, Al-Muharraq Sports Club Center and Safra School Center’’. Most of these naturalized citizens are of Asian origin, and some of them are from Syria and Jordan whose working in the ‘’security forces’’, the turnout for the elections was ‘significantly low’’ which prompted the regime to mobilize the military and security personal through phone messages and ‘’force’’ them to participate and urge their relatives to vote in the regions and constituencies in which the segments of naturalized citizens are crowded throughout the governorates. Side interviews were held with a number of participants who voted blank without nominating candidates and some of them justified this by their dissatisfaction with their constituencies’ candidates and their lack of conviction in the Parliament’s ability to reform and change. Some of them expressed fear of punishment in case their abstaining from voting, in addition to operations of ‘falsification’’ by branches of government in order to raise the percentage of electoral participation on the one hand, and to secure a victory of some of those affiliated with the regime.