His Eminence the Jurist Leader, Ayatollah Sheikh Isa Qassim issued a statement regarding the people’s position on the unjust elections, which read as follows: 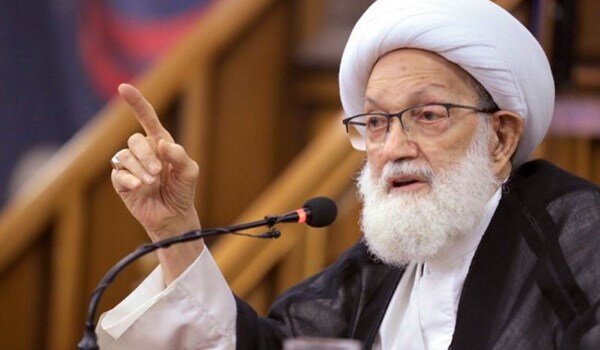 His Eminence the Jurist Leader, Ayatollah Sheikh Isa Qassim issued a statement regarding the people’s position on the unjust elections, which read as follows:

The completion of the election process according to the plan of the reactionary and unjust regime to achieve the targeted authoritarian goals of the unilateral policy, which are against the interest of the people, is just a new setback for the homeland, a deeper deepening of the people’s tragedy, a consolidation of the dictatorship of the government and a prolongation of the general ordeal suffered by the people of this dear country.

The believers in the Islamic Shariah should not remain silent in the face of the unjust electoral scheme aimed at charting their destiny against their will, and to further marginalize them and cancel their interests.

It is required of everyone, who believes in the justice of religion, and who claims to love the homeland; to stand in the face of these fraudulent elections, which are lied to the people, wrapping around their right, and if the elections took place against their will, the believers must declare their innocence from them so that their will is not revoked on the pretext of his public or silent consent by their enslavement.

Serious pursuit of correct and not fraudulent elections is imperative, and with the failure of the attempt comes the role of explicit rejection of any false or deceptive election. The crime of the people against themselves is to remain silent over the unjust election and to appear as those who are satisfied with it.

It is never right for the people to give an opportunity to anyone to leak a false claim against them that they participated in the unjust election, or remained silent on it. Thus, they relinquished their will, nullified their right to freedom, and voluntary consented to the act of servitude.

And if the government wanted the good for this country will all its people, it would not have deviated from fair elections with all that guarantees them justice, fairness and honesty to fraudulent and spurious elections that have no honest elections except false media and misleading propaganda purchased with the people’s money.