The Director of the Political Bureau of the February 14 Revolution Youth Coalition, Dr. Ibrahim Al-Aradi, said that His Eminence the Jurist Leader, 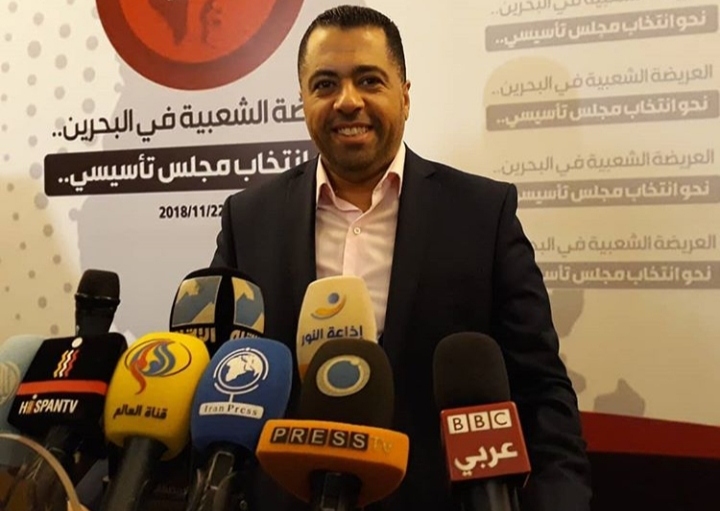 The Director of the Political Bureau of the February 14 Revolution Youth Coalition, Dr. Ibrahim Al-Aradi, said that His Eminence the Jurist Leader, Ayatollah Sheikh Isa Qassim made clear his public refusal of the fraudulent Caliphate elections, stressing that the Bahraini opposition is agreed with him, and the people of Bahrain will not be part of the plan of the fraudulent Caliphate elections.

In a series of tweets on his Twitter account, he explained that the statement of Sheikh Qassim today cut the way for every doubter who was tempted, and his weak reading of the Bahraini political scene by promoting or participating in the upcoming election of the Al-Khalifah regime, which represent a new political suicide, and a moral and constitutional disaster for those who want to get involved in it.

Dr. Al-Aradi added, “after the clear and unequivocal statement of His Eminence, the Jurist Leader Sheikh Isa Qassim (Dama Zollahu), it is incumbent upon us, as the opposition and followers of this resistant national political line to thwart the Khalifi scheme by frustrating their alleged elections, to shame everyone who promotes and participates in them, and this is a strict method fits in with the clarity of the statement of the Leader, Ayatollah Qassim: the unjust electoral scheme aims to chart the destiny of the people against their will”.

On Wednesday, July 13, 2022, His Eminence the Jurist Leader, Ayatollah Sheikh Isa Qassim, issued a statement regarding the people’s position on the unjust elections, in which he emphasized that the completion of the election process according to the plan of the reactionary and unjust regime to achieve the targeted authoritarian goals of the unilateral policy, which are against the interest of the people, is just a new setback for the homeland, a deeper deepening of the people’s tragedy, a consolidation of the dictatorship of the government and a prolongation of the general ordeal experienced by the Bahraini people.

He called on the people not to remain silent in the face of the unjust electoral scheme aimed at charting their destiny against their will, and to further marginalize them and cancel their interests, pointing out that it is never right for the people to give an opportunity to anyone to leak a false claim against them that they participated in the unjust election, or remained silent on it.