On Tuesday, June 21, 2022, the February 14 Revolution Youth Coalition held in Beirut a ceremony honoring the martyr “Muzahem Al-Shater” on his fortieth anniversary. 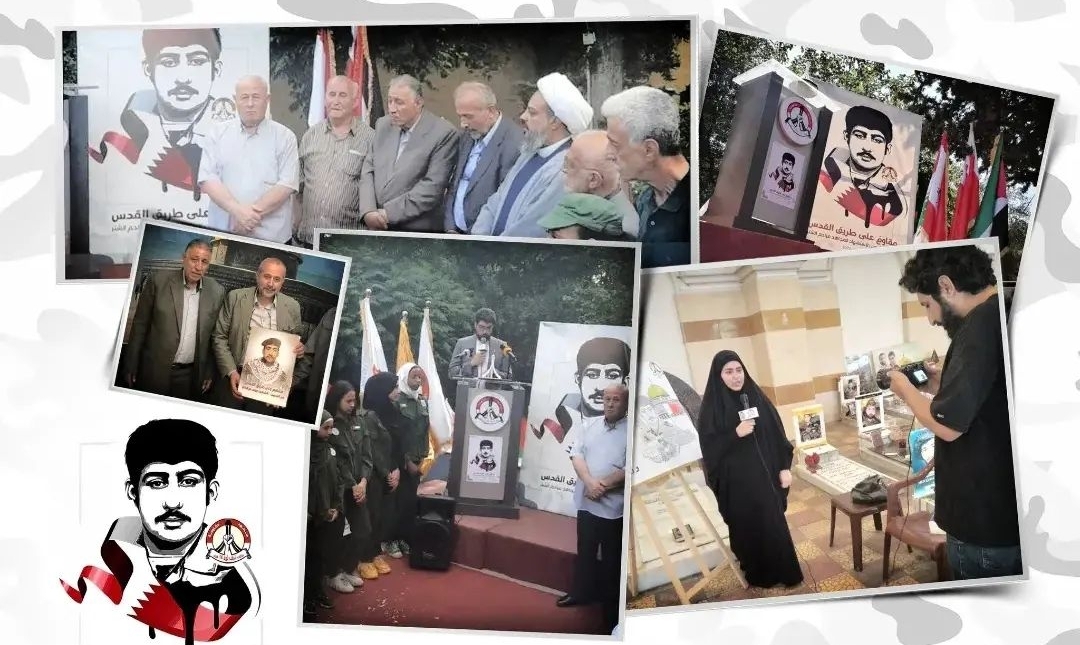 On Tuesday, June 21, 2022, the February 14 Revolution Youth Coalition held in Beirut a ceremony honoring the martyr “Muzahem Al-Shater” on his fortieth anniversary.

The ceremony was attended by Palestinian and Party leaders and a number of members of the Bahraini opposition. The Secretary of the Palestinian Allied Coalition Forces in Lebanon and the people’s Front for the liberation of Palestine- the General Command “Mr. Abu Kifah Ghazi” and a member of the political council of Hezbollah “Hajj Mohammad Saleh” had two speeches in which they stressed the unity of the axis against Zionists and the arrogant countries.

The coalition made a speech saying that on this day in 1982, there was a group of honorable Bahrainis fighting heroic battles in southern Lebanon, in Nabatieh, to repel the Zionist occupation forces and to associate with the Palestinian resistance, as the resistance sons of Bahrain in all their categories and affiliations “Sunnis and Shiites” had believed in armed struggle against the Zionist enemy.

The coalition stressed that Bahrainis had devoted themselves to the Palestinian cause, although their country had been – and still – smarting over the tyranny of a corrupt dictatorial regime that was campaigning in oppression and shedding blood to this day, but their vision and insight were clear as the clear of case, the enemy and the great goals, and among them was the martyr fighter ‘Muzahem AbdulHamid Al-Shater’.

The coalition pointed out that the martyr fighter “Muzahem Al-Shater” was the first model for loyalists of this case, and he deserved more than honor, revival and ceremony, so today his fortieth anniversary is commemorated under the slogan “Resistant on the road to Al-Quds”. Also stressed that the martyr “Muzahem” embodied the thesis and the insight that the Bahrainis adhere to and steadfast in supporting the true causes of the nation, and his involvement in the liberation battles against the Zionist enemy was an additional dedication to the freedom battle in the countries.

The February 14 Coalition added that the situation in the Gulf in 1982 was re-forming with the vigor of the Iranian renaissance led with the Great Imam Khomeini. The Zionist-American project wanted with some Arab rulers to besiege it because it sets its axis toward Al-Quds Al-Sharif, but since that time, the peoples of the Gulf turned around the axis of Al-Quds Al-Sharif, and has united under its true banner, without hesitation, and the heroic stance of the martyr fighter Al-Shater was a clear indication and evidence of that.

The coalition said that at this dangerous stage in which the Al-Khalifa regime in Bahrain was drawn into the Zionist project and concluded agreements of treason and shame with the enemy of the nation, the Bahrainis are renewing the popular position in Bahrain and the Gulf that strongly rejects these agreements, stressing that the popular rejection of normalization is a commitment and pledge that the Bahrainis prove every day, in streets, on walls and everywhere, with voices, fists, chances and feet, which they are resistant and steadfast.

The February 14 Revolution Youth Coalition stressed that the martyr fighter “Muzahem Al-Shater” has the right to be reminded by the free people of the world, and to immortalize his name and his memory. His body must be honored through the disclosure of his burial ground lost with time and returned to his homeland to be buried among his parents, calling on those who love the martyr fighter “Al-Shater”, his brothers and his comrades to establish a special committee whose mission is to investigate his buried, and work with the possible means to return him to his family and country.

A symbolic memorial for the martyr was inaugurated in the cemetery of the martyrs of Palestine in honor of his heroism and sacrifice.