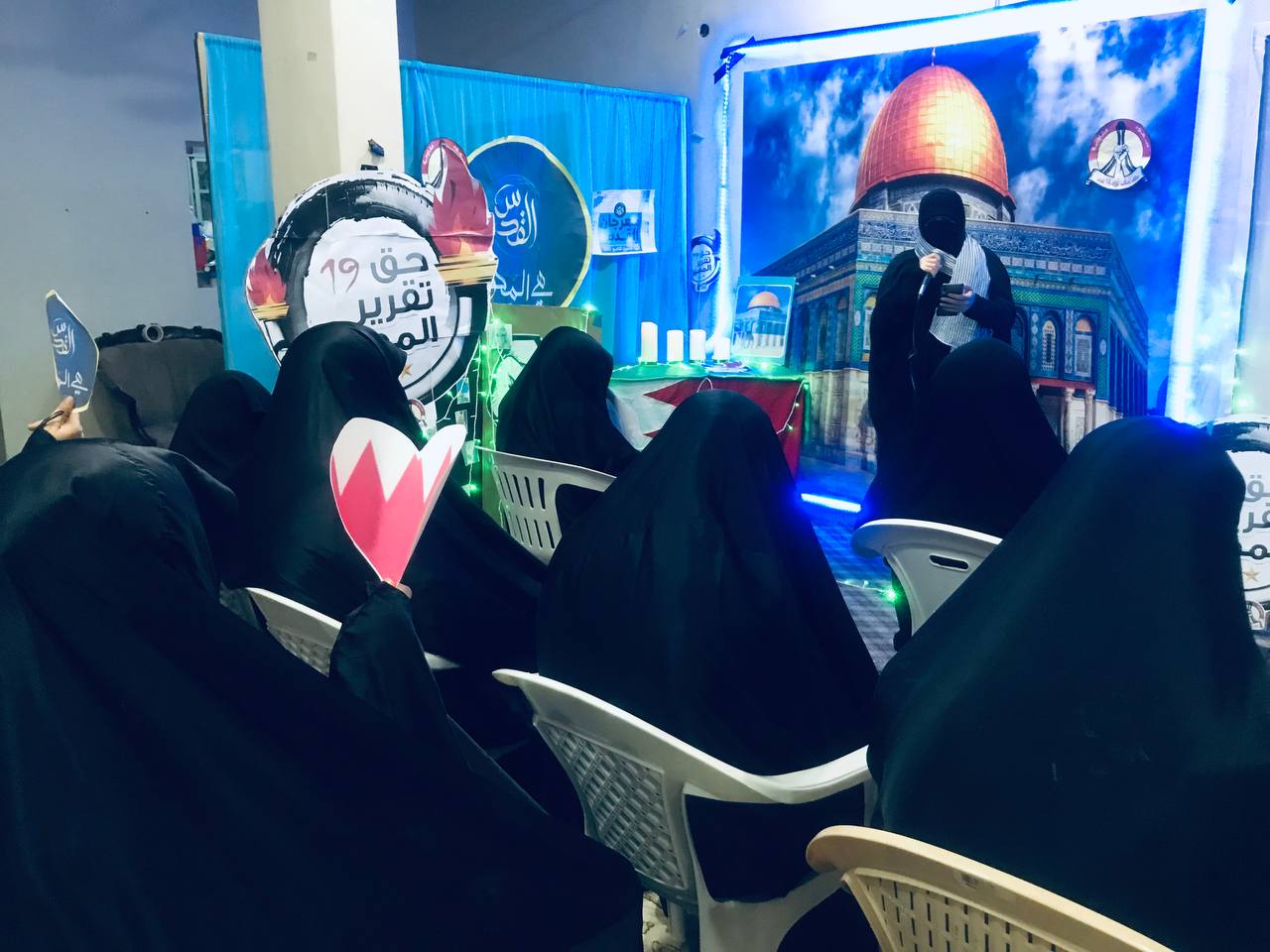 The Women’s Committee of February 14 Revolution Youth Coalition said that the triumph of The Late Imam Al-Khomeini’s Revolution (May his secret be sacred) over the Shah’s regime, and his establishment of an Islamic state was not the only thing that terrified the high-handedness, given that the Late Imam is a visionary man, and his choice to be the last Friday of the Holy Islamic month of Ramadan as Al-Quds day in order to consolidate its importance in the Islamic and Arab conscience is only just a hard blow to this brutal high-handedness who realized then that the battle in which he thought that he had won will extend and its outcome will not be as he wished.

In her speech at the Ninth Women’s Speech Festival which is held on Tuesday, 26 April 2022, under the slogan “Al-Quds is the pivot”, she added that when the Late Imam called on the Muslims all over the world to devote the last Friday of the Holy month of Ramadan to be “Al-Quds day”, and the declaration of International Solidarity in support of legitimate rights of the People of Palestine in 1979, he wanted to confirm that the pivot battle continues as long as Palestine is occupied, and demanded them to revive this day through rallies, sit-ins, events and various activities that to keep Palestine present in their souls, associated with struggles and resisting against injustice wherever it occurs.

The Feminism of 14 February Coalition stated that “Al-Quds Day” is linked to the holy month of Ramadan and its last virtuous days in order to remain the religious aspect of this issue embedded in the religious conscience and at the core of faith commitments.

She stressed that the people of Bahrain are walking under the banner of the Al-Fakih the Commander Ayatollah Sheikh Isa Qassim who believes that “the International Quds Day” is a day for the nation, for its unity, its strength, its awareness, for the vitality of its will, to enhance its self-confidence, to sharp its resolve, its pride, its dignity and its victory, and the spirit of renaissance and resistance. Furthermore, it is a day for the issue, to insist on the issue, to focus on it, to mention it, to be present and to achieve its triumph”.

The Women’s Committee said that the people of Bahrain had proven their commitment to the issue of Palestine, they offered lots of martyrs for it, and they not only reject normalization with Zionists but they strongly denounce it, fighting and confronting it, as this normalization is the normalization of a regime that is already lost popular legitimacy, and according to her, its decisions don’t concern the people who demands self-determination away from its unjust sentence after raping it for a hundred years.

The Feminism in the Coalition at the Ninth Women’s Festival on the occasion of Al-Quds Day, renewed their pledge to the free people of Palestine that the people of Bahrain will not abandon the central issue “Al-Quds”, and will never waive their rights and the rights of the Palestinian people until they are completely obtained, and will continue to face all forms of occupation in their land until they reach the land of Palestine.