The February 14 Revolution Youth Coalition announced his resumption of the “efficiency of the right to self-determination” in its 19th edition. 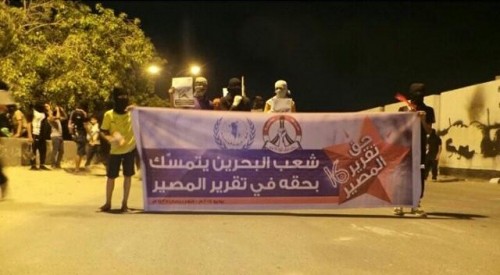 The February 14 Revolution Youth Coalition announced his resumption of the “efficiency of the right to self-determination” in its 19th edition, as part of his Ramadan activities package under the slogan “Victorious Fasting”, on Thursday, April 14, 2022 in “Sitra” the capital of the revolution.

The efficiency of self-determination is one of the revolutionary efficiency used by the Bahraini people during the revolution, because they insisted on their right to determine their political and social self-determination, affirmed by the United Nations in its resolutions 2955 and 2070, and provided for in Article 1 of the International Covenants on Civil and Political Rights, and Economic and Social Rights, issued on December 16, 1966, which states:” All peoples have the right of self-determination. By virtue of that right they freely determine their political status and freely pursue their economic, social and cultural development”.The first efficiency of right to self-determination was launched on Thursday, June 30, 2011, in the city of Jidhafs and continued almost weekly this year. Furthermore, the participants in the sit-ins and demonstrations were being subjected to the most severe types of repression with tear-gas, Shuzen bullets and arrests.In the following years, it continued once or twice a year, until it reached the 18th effectiveness that was held on Thursday, May 31, 2018 on Sitra Island, where angry demonstrations took place and spread to other regions and continued for several days after being postponed from 2016.

Today, the Bahrani people are preparing to complete what they started in 2011, and “Sitra” the capital of the revolution, is getting ready to receive the participants in this effectiveness in its 19th edition, confirming that the Bahrani people will not waive their right to self-determination.