The Political Council of the February 14 Revolution Youth Coalition prepared a special file on the ninth anniversary of the Saudi-Emirati occupation of Bahrain. 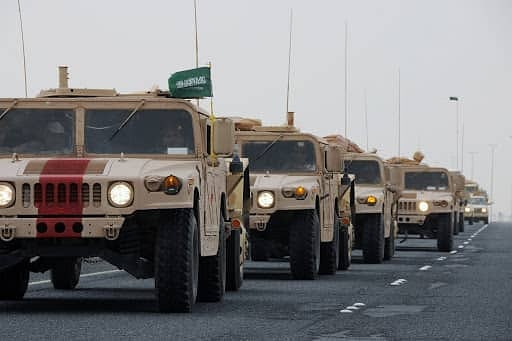 The Political Council of the February 14 Revolution Youth Coalition prepared a special file on the ninth anniversary of the Saudi-Emirati occupation of Bahrain.

This file, titled: “100 Global stances: The Saudi-Emirati Presence in Bahrain ..is an Occupation”, contained positions and opinions of political and legal personalities from different parts of the world opposing this illegal presence, and affirming the right of the Bahraini people to freedom and struggle.

– Academic professor Hassan Baddah said that the people of Bahrain are a school of patience that teaches the people, as they  are still patient with the injustice of al-Khalifa regime and steadfast in its principles.

Baddah called on all societies to learn from this great people who wore shrouds and demonstrated peacefully in front of the unjust regime’s armor and its mercenaries to claim their legitimate stolen rights.

The head of the Palestinian Civil Society, Mr. Jamal Baraka, said that the Palestinians support peoples revolting against occupation and tyranny, including the people of Bahrain who have long supported the Palestinian brothers in their plight and the issue of Quds in particular, as well as supported many Arab issues based on its nationalism.

– Member of the Assembly of Resistance Scholars, Imam of Al-Saddiq Mosque in Mauritania, “Sheikh Muhammad Fal Bin Muhammad Irshaid” condemned the Saudi-Emirati occupation of Bahrain, saying that the Saudi regime has long harmed the Arab and Islamic peoples, asking Allah “Almighty” to grant the Bahraini people freedom, dignity and victory and to get rid of the tyrants.

The prisoner Nabih Awada, who was freed from the prisons of the Zionist enemy, , said that it is imperative for all believers of human freedom and dignity to stand with the Bahraini people to restore their dignity and sovereignty, stressing that Bahrain is an occupied country by the Saudi Arabia supported by the United States and the Zionists, and standing with it means standing with the Palestinian people and all peoples claim freedom.

– The director of the university medical laboratory, Mrs. Nour Hammoud,  from Lebanon greeted the Bahraini people for their sacrifices for the freedom and dignity, pointing to the extent of the suffering and oppression by Al-Khalifa  regime and its Saudi, Emirati and Zionist allies, affirming that the Lebanese stand with the struggle of the Bahrainis against their tyranny, because they tasted the bitterness of the Zionist occupation and they offered sacrifices until they defeated the aggression. She stressed the continuation of the resistance until defeating the occupation.

– The Lebanese writer “Dana Kanso” said that the revolution in Bahrain, despite of nine years of repression, detention and torture, has maintained its peace and only raised the flag of Bahrain, indicating that the Lebanese are proud of this peaceful revolution that challenged the tyrants because it is a revolution of right and legitimate demands .

– The Palestinian prisoner, freed from the Zionist prisons, “Abbas Qablan,” described the Bahraini people as the oppressed  who resisted the tyrants peacefully and their weapon relying on Allah and patience, and their slogan “If you  support Allah, he will support you “. The revolutionaries face killing and arrest, and they are steadfast, no matter how severe the difficulties, he added.

– The Lebanese activist, “Mohamed Takshi”, paid tribute to the people of Bahrain who always stand with the causes of right peoples, describing them as great, patient and steadfast people, noting that all the Arab people are one people,  and have one concern.

– The director of Charity Association in the city of Tyre “Hajj Ahmad Al-Jubaili” affirmed his support for the Bahraini people in their righteous revolution against injustice, and demands for social justice, the exit of any foreign occupied forces, ending the suppression.

– The Academic professor “Mr. Ali Sulei”, paid tribute to the steadfast people of Bahrain, the detainees, their families and the martyrs, on the ninth anniversary of the Saudi occupation of Bahrain by the so-called the “Peninsula Shield Forces”.