Director of Political Bureau of the February 14 CoalitionDr. Ibrahim Al Aradi said Sheikh Nimr Baqer had revealed  his political project in his bold speeches , which summed up the depth of the claims. He turned his experience as a symbol for freedom and a living example of emancipation from the yoke of slavery and submission. 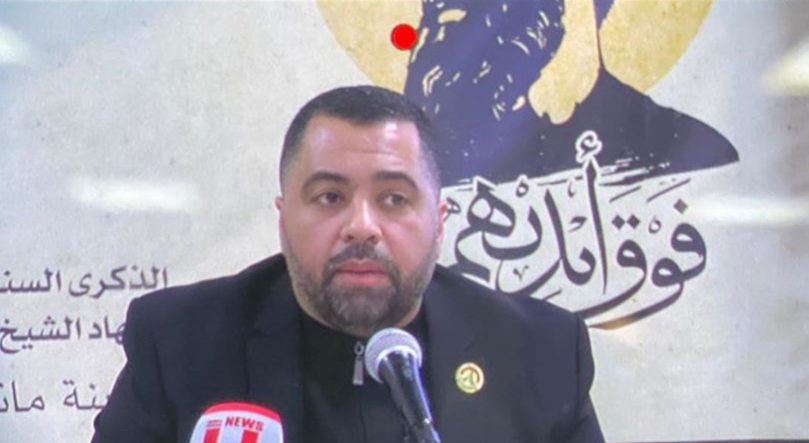 Director of Political Bureau of the February 14 CoalitionDr. Ibrahim Al Aradi said Sheikh Nimr Baqer had revealed  his political project in his bold speeches , which summed up the depth of the claims. He turned his experience as a symbol for freedom and a living example of emancipation from the yoke of slavery and submission.

This came during a rhetorical festival under the slogan “Over their hands” , held by the Hejaz’s  opposition in the British city of Manchester, on Saturday, January 4, 2020. The festival was held to mark the fourth anniversary of the martyrdom of Ayatollah Sheikh Nimr Baqer , where Al-Aradi  said the late Sheikh Nimr had put the nation and all of the humanity in front of experience exudes vitality for students of freedom, after he broke the myth of awe and fear of the dictator and tyrant, and put this experience in front of the world for the benefit of all liberal students .The experience which  provides them and their communities with power, vitality, values ​​and principles of dignity in the face of tyrants.

Hailing the heroic positions of His Eminence Al- Aradi added : It is very easy to conceptualize behind the blocking and barriers in ways to counter the juggernaut, and confront the totalitarian authoritarian regimes, and easy to record paper tournaments in dark rooms, and achieve false victories in wars by telescopes. But it is rare to record the situation on the ground , especially when it costs too much, and so was the cry of Ayatollah Nimr in the face of tyrants, and in their own home, and not from behind the border.  This is a position that at least condemning the silence of peoples  on the oppression of the rulers and tyranny.

He stressed that the experience of Ayatollah Sheikh Nimr must be practical, by taking actions in front of the unjust and tyrannical regimes , and this is one of the fruits of his martyrdom .

Dr. Al-Aradi added that the Sheikh became the greatest example of courage and bravery in confronting the juggernaut,  and became a model for Arabs and Muslims and all the free world in front of the injustice rulers, tyranny and injustice, stressing that his death is an argument for people behind the walls of fear the panic of injustice and tyranny, on the other hand, a stain on the dictatorial, authoritarian regimes that pay lip service day and night on freedoms and human rights.

He stressed that his murder is a fledged crime by a regime that does not hesitate to bloodshed in dealing with those who disagree in opinion and attitude, as revealed that the human needs to formulate a new system puts an end to the dictatorship, and places necessary rules for the protection of human dignity and the maintenance of justice mechanisms for societies , explaining that it does not lie on its side by behead  people only, but also the crime of the abduction of his body and hiding it, which has not been delivered yet to his family, since four years after his murder.

At the end of his speech, Al-Aradi called on all free and honorable people in the world to deem  the martyr Ayatollah Nimr as an icon that expressed human aspirations for dignity and justice, and called on all international organizations and bodies, legal, social and religious figures to exercise all forms of pressure on Saudi Arabia to halt the political executions, and an immediate discloser of the body of the martyr Sheik Nimr and hand his body over to his family, so that they and all the people of the Arabian Peninsula could hold a burial ceremony that befitting his great personality.