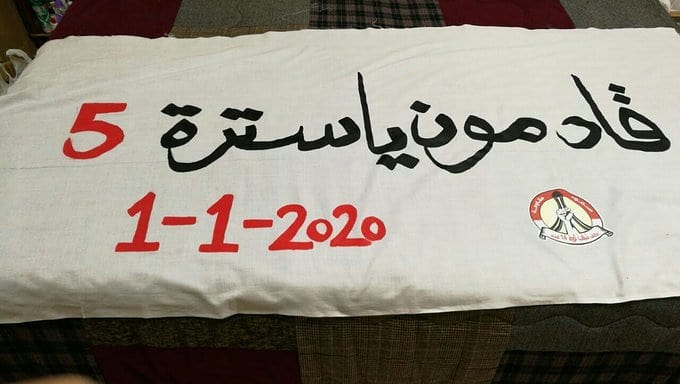 It praised the contributions made by the people of Bahrain, who have exceeded all the limits in their steadfastness and stability since the beginning of the revolution in February 14, 2011 until today. They weakened the oppressor, and never been tireless , and their survival, fortitude and great sacrifices were became icons of victory that astonished the world, terrified the arrogant, and stunned the thrones of the oppressors, it added .

It said that ” a year of jihad and struggle was passed  ,with your thundering screams “We won’t be humiliated”  and a new year of steadfastness and perseverance” , explaining that this can only be achieved with patience and integrity, and from this standpoint, we chose the new year’s revolutionary slogan “patience and straightness”.

It also revealed the personality of year “renewal and challenge” , the human rights activist  Ibtisam al-Sayiag, for her courageous views on various popular issues, illustrated by the real humanitarian situations. She was the one who incubated women in custody and families of martyrs and detainees. She deserved to be honored  today with all of women in Bahrain.

It renewed the allegiance to the martyrs, and all the prisoners, and the covenant to move forward towards achieving the goals of the revolution. With the approach of its ninth anniversary , the people should be on alert and readiness to ignite its 10 years candle, stressing that victory can only be achieved by unifying efforts and hearts, towards the ultimate goal, for the supreme interest of people, and their great sacrifices in all stages of struggle.

“The bloody crimes committed by Al-Khalifa regime will not terrify us, until we achieve the  divine victory that was promised by Allah in his book, and his prophet , so be on the covenant and the promise of the ninth anniversary ” , the Coalition concluded.