On the occasion of the second anniversary of the Massacre of Redemption’s Square, the revolutionary movements in several areas were continued. 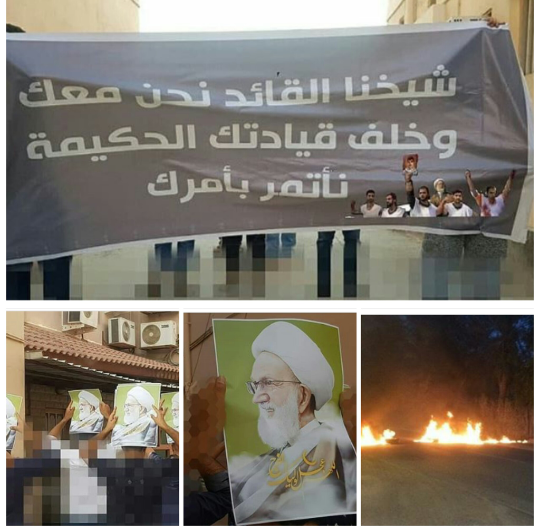 On the occasion of the second anniversary of the Massacre of Redemption's Square, the revolutionary movements in several areas were continued.

Fulfilling the vow with these martyrs, rejecting the normalization of al-Khalifa entity with the Zionists and supporting Ayatollah Issa Qassim, the people in the towns of al- Musalla marched on Friday, 24 May 2019 in revolutionary demonstrations amid the sound of angry slogans that demanding the right of retribution from the killers of the martyrs.

In the banner of the splendor-the town of al-Nuwaidrat, the heroes of the squares cut off the Street.77th with the flames of anger in loyalty to the martyrs and a rejection of normalization with the Zionists, despite the mobilization of al-Khalifa's mercenaries.

In the same regard, the walls of the towns of Abu Saiba and Shakhoura were adorned with pictures of the martyrs of the redemption and Ayatollah Qassem.

It is noteworthy that on Thursday, May 23, 201, the gangs of mercenaries attacked the Fedayeen in the square of redemption in the town of al-Diraz, and committed a horrific massacre, resulted in five martyrs, hundreds of wounded and detainees from the unarmed strugglers.