The Director of the Political Bureau of the February 14 Revolution Coalition in Beirut, Dr. Ibrahim al-Aradi has addressed the mothers of the martyrs, wounded, detainees, persecutors and the displaced in all parts of the world on the occasion of Mother’s Day. 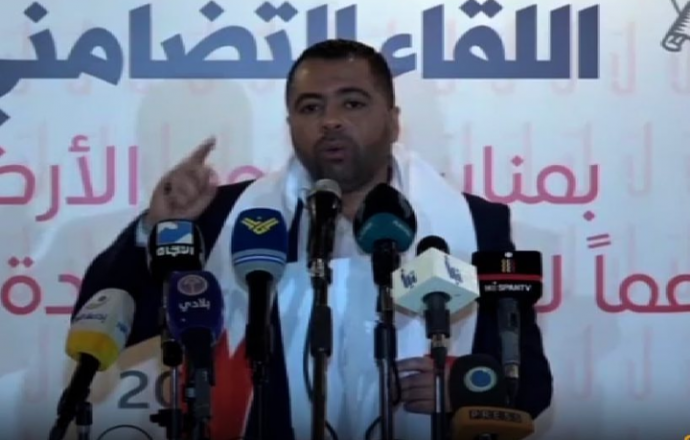 The Director of the Political Bureau of the February 14 Revolution Coalition in Beirut, Dr. Ibrahim al-Aradi has addressed the mothers of the martyrs, wounded, detainees, persecutors and the displaced in all parts of the world on the occasion of Mother's Day.
In a speech at the solidarity meeting "From Bahrain to Palestine" on Thursday 21 March 2019 on the occasion of Land Day and the return marches , he congratulated the mother of the universe- Palestine, for which the meeting was held.
Al-Aradi stressed that it is no longer a secret to any Arab and Muslim in the world the situation of contradiction and dissonance between the decision of the people of Bahrain and its position and the decision of the ruling power represented by al-Khalifa regime and its position on the Palestinian issue, stressing that at a time when the popular scene of Bahrain is steadfast on the support of the Palestinian people and its cause which is the central cause of all the free Arab peoples, manifested in rejecting its betrayal through the desecration of Manama and making it the capital of normalization in the Gulf and a transit corridor for the deadly terrorist Netanyahu and his fellow Zionists from rabbis and others, Al-Khalifa Al-Sabah and the disgraceful normalization run by the head of the ruling dictatorial regime Hamad through the foreign minister of the regime Khalid bin Ahmed, who daily humiliates the feelings of millions of Arabs, Muslims and liberals in the world and injures them with his positions in favor of normalization and even defending the Zionist entity.
This image reinforces the principle of asking the people of Bahrain to self-determination and to redeem themselves from these abhorrent policies that do not represent it. It affirms its right to self-rule in constitutional and democratic ways and standards. Palestine remains its identity and the priority of its choices through a political system determined by popular will.
"The policy of escaping from popular demands through the gate of normalization with the Zionist enemy will not do you any good but will deepen your crises," he said. It will embarrass you not only with the people of Bahrain, but also with the people of the entire free zone. He stressed that the entire people of Bahrain rejects all forms of normalization or what the regime calls dialogue and meeting of religions.
He called on this meeting, which he hopes will be the first for more meetings and events of solidarity with the Palestinian people who confronted the Zionist and Wahhabi terrorism, to solidarity with the revolution of the people of Bahrain struggling to lift the injustice from it and work to rescue it from the grip of the dictatorship that ruled by iron and fire and suppressed all its options and kill the dreams of its youth and their future, and make its case present in all activities and events, because the Arab people oppressed by the entity of usurping power and legitimacy, just like the Zionist entity, a system that does not represent or express or reality and ambition, And will not abandon the support of the issues of the Arab and Islamic right and foremost the Palestinian cause.
He paid tribute to the young people of Gaza who participate in the return marches, blessed by the courageous hands that have been stabbed by the Zionist soldiers for a long time, and by every Palestinian father, so that the love, dignity of Palestine will remain alive in the hearts and minds of the Bahrainis.
Finally, Dr. Al-Aradi thanked the attendees for their participation in this meeting and praised them in the name of the sons of Bahrain, al-Qatif and al-Ahsa in particular.
الوسوم : Dr. Ibrahim Aradi, February 14 Revolution Coalition, اخرى