Dr. Ibrahim al-Aradi said that the coalition of February 14 decided to go to the public through the political council to complete the field work initiated by the militants at home. 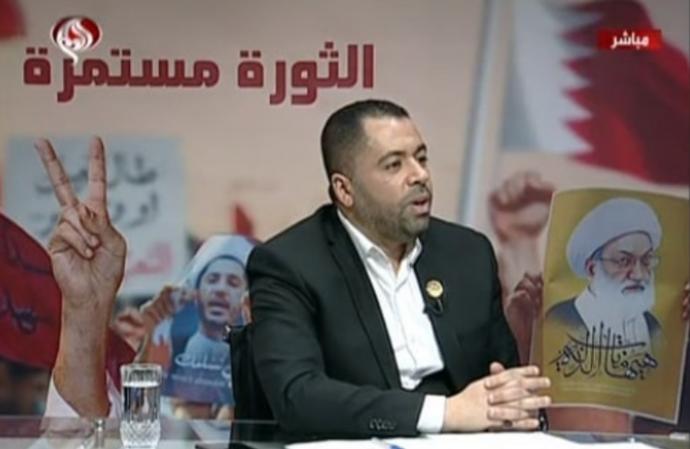 Dr. Ibrahim al-Aradi said that the coalition of February 14 decided to go to the public through the political council to complete the field work initiated by the militants at home.

In an interview with Al-Alam TV on Wednesday, February 27, 2019, he pointed out that the Coalition recognized that young women and men of all ages decided to change the reality in Bahrain, based on a political, democratic project and an integrated vision, and its cadres and members are all abroad, but the power, active action, struggle, resistance and steadfastness are at home.

He explained that working towards the right to self-determination sought by the people of Bahrain and the eradication of the cancer gland al-Khalifa, which governs Bahrain is a strategic objective by the Coalition of February 14, and the political scene today is part of this work, and contrary to what is rumored, inside and outside, but the political face that emerged is only a part of the vision that is announced from time to time.

He added that the coalition of February 14 began its political work from the Green Zone in Baghdad with Mr. Nuri al-Maliki, and actually began from Beirut, to be a political action to complement the work of struggle in the field in Bahrain, having received a large incubator environment in Baghdad and Beirut, and since that time it is the difficult figure for al-Khalifa regime. It is with all the forces of the field in all the regions of Bahrain, which have never stopped moving, and are still steadfast, will continue with them until the realization of the right to self-determination.

He said that the coalition has emerged to the world in a field, and so far it organizes events and political action within its system of work and its strategic vision against this authoritarian regime, which responded through the spokesman of the UAE regime, its ally because they knew what the coalition means, it reflects the position of rejection of UAE that occupies Bahrain.

He pointed out that the coalition condemned the death sentences issued through a statement, which is part of its culture, in addition to the illegality of dealing with citizens, but coexistence with this system until the realization of the right to self-determination, and the civilized people of Bahrain can not coexist with the al-Khalifa gang that suppresses people.

He added that the unjust dictator Hamad is not the owner of his decision, but a policeman of Mohammed bin Zayed and Mohammed bin Salman, and he is resorting to execution because to terrorize people throughout 8 years of intimidation, murder, torture and gross violations. Stressing that there is no need for the courts of dictator Hamad, there is no longer any room to rule the Bahraini people by the dictatorial regime , and its role is now limited to the issuance of death sentences and the abolition of nationality.

On the approach of the 14 February Coalition, al-Aradi said that the Pearl Charter and its details reflect its peaceful, civilized reality and its peaceful approach to lead people to choose their political system and prosecute all the killers.

Regarding the declaration of the political council from Baghdad, he said that the announcement of prominent Iraqi leaders and national symbols and solidarity with the coalition of 14 February is an important message that the Iraqi government and the rest of the forces do not accept the occupation of Saudi Arabia and UAE to Bahrain.

Al-Aradi stressed that the February 14 coalition extends its hand to all opposition forces to cooperate with it in order to win the people's right to self-determination, which is in close relationship with them in all its various events and with it in a row against al-Khalifa regime, and what arises from the existence of differences between the coalition and the rest of the opposition forces is only lies invented by Al-Khalifa regime.