A new step by al-Khalifa terrorist entity to manipulate the international community and the UN Human Rights Council in order to cover up its daily violations and crimes against the people of Bahrain. 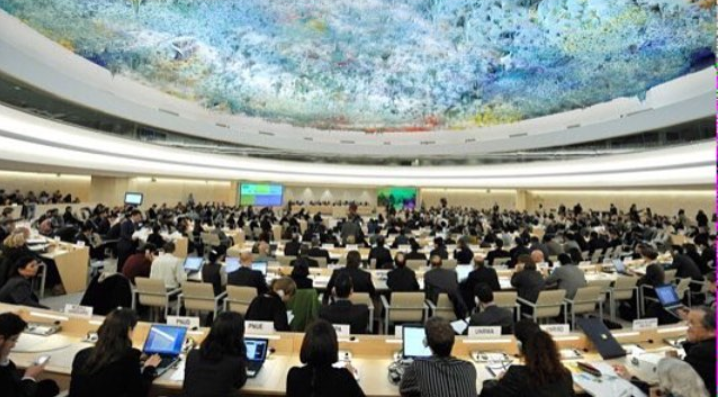 A new step by al-Khalifa terrorist entity to manipulate the international community and the UN Human Rights Council in order to cover up its daily violations and crimes against the people of Bahrain. The Assistant Foreign Minister of al-Khalifa Entity (Abdullah al-Dosari) announced the intention of al-Khalifa government to run for United Nations human rights.

We in the Coalition of 14 February Youth Revolution, put before the international public a number of questions and the reasons that prove the incapability of this entity for this post, which are reasons for accountability and sanctions.

First: the crimes and violations committed by al-Khalifa regime for many decades against the entire people of Bahrain, which will not be subject to statute of limitations, since its bloody file is clear to the international community:

Regardless, the absence of the demands of the people of Bahrain followed by the hostile media, and the nomination of al-Khalifa government, which lacks popular legitimacy, is only a malicious maneuver to block the way for the Security Council to open this dangerous bloody case by the outgoing UN High Commissioner for Human Rights, Prince Zeid Bin Ra’ad Bin al-Hussein. But it did not succeed because of the US-British and Saudi cover and its impact.

Second: will the members of the Human Rights Council accept to be false witnesses to these flagrant violations of the human rights committed by the most senior officials of al-Khalifa regime against prisoners of conscience in their prisons?

Third: will they accept that the reputation of this Council will be tarnished by adding this bloody regime to the Council, which has a new and old legacy in slaughtering civilians at times and torture at other times?

Will the Human Rights Council discuss with the official delegation of al-Khalifa entity the file of torture in prisons, extrajudicial killings, and the arbitrary deprivation of citizenship for hundreds of people of this people? How will it deal with the issue of the right of self-determination demanded by the people for years, which is at the heart of the principles of the Human Rights Council and the constitutions of the United Nations?

Four: there are important pending questions that the Human Rights Council should ask al-Khalifa government, which lacks legitimacy, to respond to, instead of allowing it to run for membership.

We call upon the officials and members of the Human Rights Council to take into consideration their role, credibility and fairness to the suffering of the great people of Bahrain, to open the file of human rights violations in Bahrain and to condemn the official decision-makers of al-Khalifa family involved in these blatant daily violations instead of allowing a non-elected government which exercises the most extreme forms of psychological and physical torture and political exclusion.

The Council faces a major challenge and is threatened with credibility if the government of the al-Khalifa system nominates to its membership. It should instead punish and oblige it to accept the visit of High Commissioners to Bahrain, to exercise their work unconditionally, especially the Human Rights Council in more than one session condemned this government but it did not respond to it and did not allow the High Commissioners to visit Bahrain to monitor the deteriorating human rights situation in Bahrain.

Our honorable and sacrificed people must continue their national struggle in various fields to gain their rights, and to beware of any international trick practiced by al-Khalifa regime under the pretext of protecting their rights to cover all its heinous crimes against them and to show the face of peace and legitimacy which is a false face and in contrary with the bloody reality practiced on the land by the dictator Hamad al-Khalifa and his uncle, Khalifa bin Salman, head of the illegitimate and unconstitutionally elected government.