The declarations made by the Ministry of interior of the terrorist al-Khalifa entity and some officials in this illegal government against the leading scholars in Bahrain are disgusting. 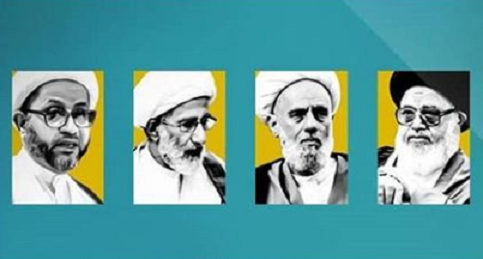 In the name of Allah, the merciful and compassionate))

The declarations made by the Ministry of interior of the terrorist al-Khalifa entity and some officials in this illegal government against the leading scholars in Bahrain are disgusting. These statements have quickly revealed the ugly face of the dictator Hamad and his dishonor after it was showed off to announce the commutation of the death sentences of four political prisoners to life imprisonment. These childish statements have reflected the bulling policy of this entity that lacks the legitimacy .

The Bahraini leading scholars ,led by the leading Faqih (jurist) Ayatollah Qassim who is under the house –arrest and other leading figures inside the prisons ,have the highest degree and place to reply on these systematic and based methods ,the threats issued by al-Khalifa ministry of terrorism and bunch of conspirators to our dignified people .The dictator Hamad ,who seeks to cleans his hands from the bloods of our people through some tricky ways ,is not worth the sand of our buried symbols and struggling scholars who seek to ward off the danger on our beloved country ,they are keening to build its present , future and its supreme interests .

We are in the coalition of 14Feb youth revolution ,and while we denounce all these hysterical and hasty acts made by this terrorist entity against our honorable scholars ,leading figures and all our dear people ,are emphasizing that the case of the political prisoners is uncompromising or under political blackmail, and that what sought by al-Khalifa gangs to achieve under any circumstances .We also are confirming that the political prisoners have all the guaranteed rights according to the international laws and conventions of the United Nations human rights .We reemphasizing that our people have the right of self –determination and choosing new political system that achieve their legal hopes and aspirations according to the results of the public referendum in 2014 .There is no salvation for our people and our country unless this corrupt al-Khalifa regime ended ,and that what was proven through the previous experience and will be proved through the coming ones ,the victory comes only from Allah (the God).