The opposed revolutionary powers in Bahrain ( Coalition of 14 Feb youth revolution ,Al-Wafa’a Islamic movement, Islamic action movement and Haq movement ) are condemning the savage judgments confirmed by the military courts of al-Khalifa criminal foe against a number of Bahraini citizens 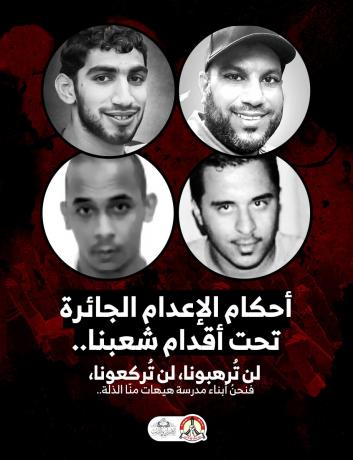 The opposed revolutionary powers in Bahrain ( Coalition of 14 Feb youth revolution ,Al-Wafa'a Islamic movement, Islamic action movement and Haq movement ) are condemning the savage judgments confirmed by the military courts of al-Khalifa criminal foe against a number of Bahraini citizens ,particularly the capital punishments .If al-Khalifa entity is going to carry out these judgments , it will be another horrific genocide after the persecution crime of the happy martyrs (Sami Mushaima'a ,Abbas al-Sameaa and Ali al-Sankeis ).It will also reflect the persistence of al-Khalifa entity in its brutal ideology ,based on the existence of the Saudi -UAE occupation forces and the US-British green light .

The powers are deeming that these judgments have political motives ,especially they were issued by military courts against a number of detainees who have been tortured brutally and concealed compulsorily behind the military prison walls of the so-called Bahrain's defending force (army) .In spite of the cruelty and toughness of these sentences ,they have showed the madness of the regime ,and its incapability to suppress the Bahraini revolution after seven years of torture ,killing and oppression since it was started in 14 February 2011.

Accordingly ,the revolutionary powers are stressing and urging the need to set out angry demonstrations in solidarity with the oppressed detainees ,to deny the unfair death sentence and to confirm the continuation of the revolution despite torture and killing by al-Khalifa regime .

They also hold the responsibility on the account of the international community and the United Nations bodies ,which witness the unhuman crimes of al-Khalifa entity on Bahraini people ,and standing by without performing their duties to stop them ,which means that they are incapable of doing so .Therefor ,our people have the right to follow all legal means to put an end to the regime and its mercenaries through the escalating the resistance and retaliate for the pure bloods shed by the al-Khalifa prosecutor according to the doctrine of defending the blood and honors .

The opposition powers in Bahrain: