The 14Feb youth revolution coalition has considered the meeting which have been called by the terrorist Saudi regime to deal with the so-called Iranian intervention with the regional countries is not varying from the previous colluding meetings that holding in the anti -resistance’s axis led by Saudis with a Zio-American coordination. 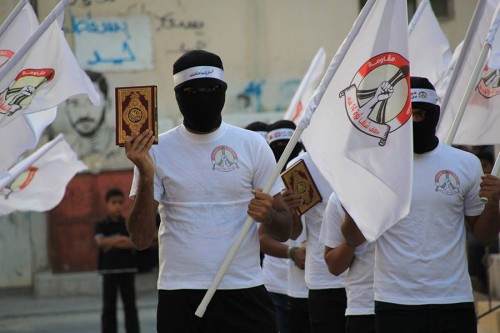 The 14Feb youth revolution coalition has considered the meeting which have been called by the terrorist Saudi regime to deal with the so-called Iranian intervention with the regional countries is not varying from the previous colluding meetings that holding in the anti -resistance's axis led by Saudis with a Zio-American coordination.

The coalition pointed out in its statement that the meeting was a good chance to the representative of Khalifa's entity, the criminal Khalid Ahmed Al-Khalifa to pretend to be weeping in front of the Arabian countries representatives to issue hostile decisions against the Islamic Republic of Iran and the axis of resistance and falsify the image of the glorious uprising and defaming the image of the revolution in Bahrain through linking it to its regional and political conflicts with the neighboring countries.

The coalition affirmed that the revolution of 14 February was begun by a will of different categories of Bahraini people who tried to put an end to the dictatorship and oppression ;demanding the right of people to have self – determination. The Khalifies are alleging falsely and unfairly that this revolution is backed by foreign powers and they accused it with external collaboration. This accusation has been circulated by dictators who always do so to cover their economic and political failure. The coalition stressed that the Bahrainis are committing to follow logical, peaceful legal and Quran's frameworks in its revolution.

The terrorism is the characteristic of Khalifa's entity and Saudis which had defiled holy places and killed ;tortured women, old men and children in their prisons.

The coalition has called on the human heart people to take a moral decision denouncing these actions on Bahrainis. It also asked the liberated people who did not have any role in killing Bahraini people to understand the Bahraini uprising and their logical demands for getting self-determination and choosing a new political government. It also called on the international community and united nation organizations to bear its moral responsibility over the governmental terrorism in Bahrain as it allied with the Saudi occupying forces to oppress people and stealing its legitimate rights.

The Bahraini people had showed its fixed stands through boycotting the 2014 fallacious elections completely. It took part in the public poll which held on the same year of the elections despite the terrorist procedures carried out by the Khalifa's entity and occupied Saudi regime in this poll.