The Bahrainis are memorizing at these days the unprecedented democratic festival which has been arranged by the independent commission of public poll under a direct supervision and coordination of the 14 Feb youth coalition. 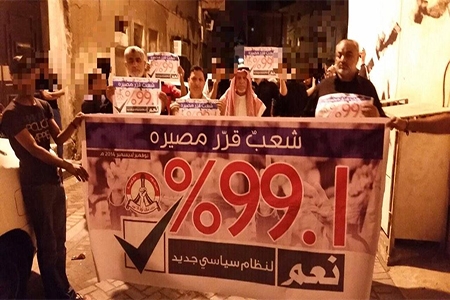 The Bahrainis are memorizing at these days the unprecedented democratic festival which has been arranged by the independent commission of public poll under a direct supervision and coordination of the 14 Feb youth coalition.

The coalition had called for a public poll to get self-determination in front of the artificial elections of the governing authority. The call has led to a massive popular move that emphasized on admitting the rights of people, the continuation of the uprising, the recovery of rights, self-determination and choosing their real representatives.

The memory took the Bahraini people back to three years ago when they were insisted on heading to the streets to show their willingness to hold the poll despite all the Khalifa's malicious endeavors to thwart this poll. They have slapped the regime twice, firstly when they took part in the poll of self – determination without any fear of being arrested or punished, secondly when they boycotted its elections so that it lost its legitimacy.

The people have sent a clear message to the entire world that those rulers had no any popular background and their only account is murder and blood.

Bahrainis have passed through a historical moments which are still existing in their minds particularly when they approved that they are an attentive and civilized people. They are aware of their own objectives since they carried out the uprising move six years ago.

They know very well that the way of freedom can be only achieved with big sacrifices and that what never came throughout its uprising march. People are waiting the day where they can deprive the oppressive and criminal regime and they gave an evidence that this regime has no any popular base and it is illegal.