Three years earlier, the Bahraini sons have uncovered the regime oppression, killing and betrayal acts as it carried out the artificial elections which boycotted by the majority of honorable Bahraini people. 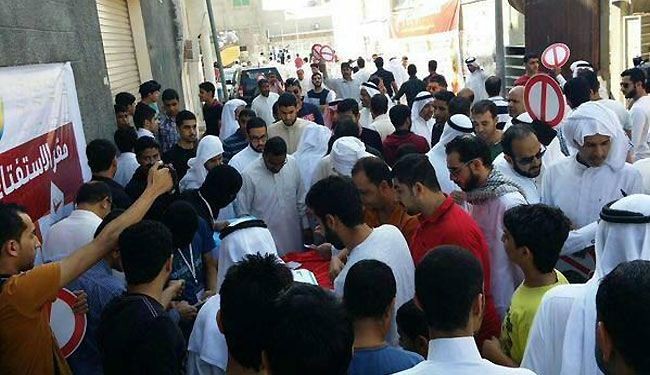 Three years earlier, the Bahraini sons have uncovered the regime oppression, killing and betrayal acts as it carried out the artificial elections which boycotted by the majority of honorable Bahraini people.

At the same time, mercenaries of Khalifa's entity from all countries have took part in the elections.

The 2018 elections have bared the Khalifa's regime. The inclusive boycotting showed the stage of Khalifa's regime where it lost its legitimacy, weakness, disappointment and disability to get support in spite of the existing media circle and the appeals on all officials from different levels to take part in it.

Once again, the 14Feb youth revolution coalition has called for an active and entire boycott of the artificial elections due to be held in 2018. It affirmed that the people of Bahrain will not give any legitimacy to a regime which had killed, violated, arrested and did many horrific crimes against them.

All the opinions after the play in 2014 have agreed that the Khalifa's regime had failed shamefully and disappointingly and it was unable to convince even its nearest allies that these results were an expression of the Bahraini hops.

It was the first hit, but the knockdown was when an alternative public poll has carried out instead of the Khalifa's elections. That poll was enough to crack the regime's hopes to gain legitimacy to its elections even if it was faked after the enormous participation at that democratic festival where the people won and reaffirmed that the right will always win.