The 14th Feb youth revolution coalition has sent an appreciation message to the free, prisoned Bahraini students and the teachers on the anniversary of the new school year 2017. 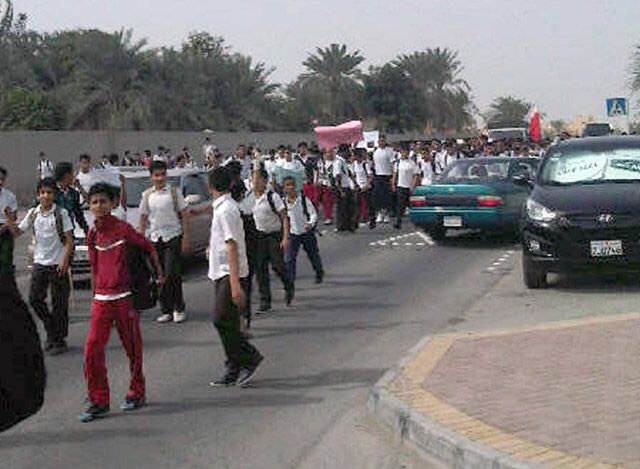 The 14th Feb youth revolution coalition has sent an appreciation message to the free, prisoned Bahraini students and the teachers on the anniversary of the new school year 2017.

In its statement, the coalition said that this academic year do not vary from other previous years which have been witnessed the beginning of the blessed Bahraini uprising.

Hundreds of school seats which are belong to the jailed and chased students are still empties as well as many other elites of Bahraini prisoned teachers and political reductants, the coalition has added.

The coalition encouraged students to keep on the path of science and to endure all the obstacles for that sake.

" you are the mainstay and future of Bahrain, we entrust you to overcome all the obstacles with your steadfastness and scientific progress".

"You will be able to make the hope in your own country and that should be achieved by attending the school seats and your progress to reached the noble goals. This victory shall be reflexed in the struggling and uprising fields.

The victory and dignity shall be gain by the one who have been harmonized them" the coalition said.

It also asked the students in the prisons to seize this opportunity in the prison to continue their study and learning so that they would not fall in the seas of darkness as the Khalifa's regime is wishing .

You must not be disappointed and weak whatever you pass through tough conditions.

Allah (the almighty) has provided them with teachers and professors who are able to help them, the coalition added.

The coalition also hailed the teachers for their sacrifices and unlimited generosity.

The teachers are the proud of the country and the students take their moral steadfastness from them to gain their aims, wishes and impatience .