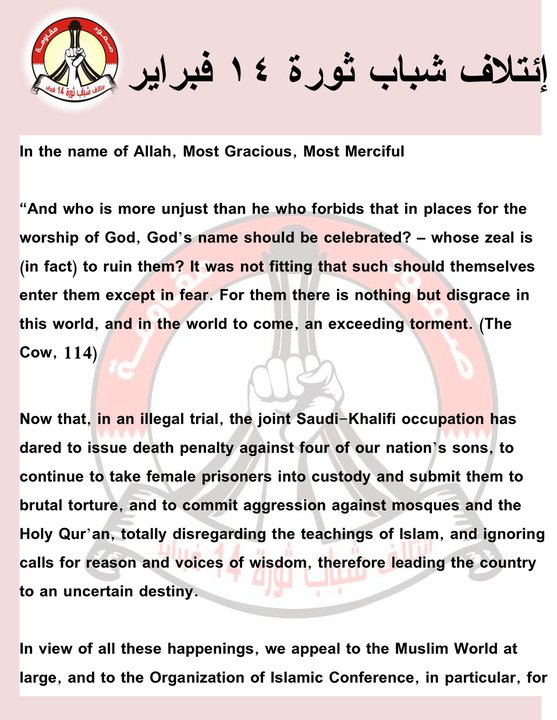 In the name of Allah, Most Gracious, Most Merciful

“And who is more unjust than he who forbids that in places for the worship of God, God’s name should be celebrated? – whose zeal is (in fact) to ruin them? It was not fitting that such should themselves enter them except in fear. For them there is nothing but disgrace in this world, and in the world to come, an exceeding torment. (The Cow, 114)

Now that, in an illegal trial, the joint Saudi-Khalifi occupation has dared to issue death penalty against four of our nation’s sons, to continue to take female prisoners into custody and submit them to brutal torture, and to commit aggression against mosques and the Holy Qur’an, totally disregarding the teachings of Islam, and ignoring calls for reason and voices of wisdom, therefore leading the country to an uncertain destiny.

In view of all these happenings, we appeal to the Muslim World at large, and to the Organization of Islamic Conference, in particular, for help, and call for their immediate intervention to stop the brutal aggression of this occupation on the peaceful people of Bahrain.

We also call upon the United Nations and the international community as well as human rights organizations to stand by their demand for the punishment of countries which violate human rights. We urge them to take a clear and just position against the Saudi-Khalifi occupation of Bahrain and to stop their crimes of genocide and cleansing against its people.
Having argued our case, and made it clear before the world, we declare that as from April 29th, we begin a crucial week. We, the people of Bahrain are determined to take action in response to aggression.
Since February 14th 2011 and until April 29th, we have been responding peacefully to all acts of atrocity committed against our people. We refrained from resorting to violence in response to aggression; neither did we act in self defence, which is our undeniable, lawful, and legitimate right.
However, now we have come to turning point. We now declare that, if this week comes to an end, and the Saudi-Khalifi occupation still continues to commit its atrocities and crimes against peaceful citizens, and against mosques and the Holy Qur’an; and if it does not initiate the release of female prisoners and abolish the unjust death sentences, our brave people will not hesitate to take action in defence of our honour, ourselves, our mosques, our land and our dignity.
We will offer no more roses to those who shoot us with gun bullets. A new phase of our glorious revolution will be inaugurated as from Friday, May 6th 2011, The Friday of Sacred Defence.

May Allah have mercy on our martyrs, and may He bestow upon them the lofty rank of Truth, O, Most Munificent.