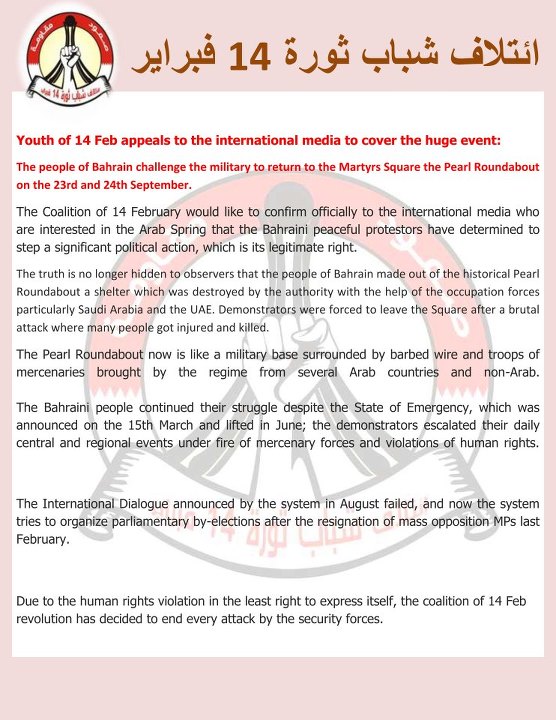 Youth of 14 Feb appeals to the international media to cover the huge event:
The people of Bahrain challenge the military to return to the Martyrs Square the Pearl Roundabout on the 23rd and 24th September.

The Coalition of 14 February would like to confirm officially to the international media who are interested in the Arab Spring that the Bahraini peaceful protestors have determined to step a significant political action, which is its legitimate right.
The truth is no longer hidden to observers that the people of Bahrain made out of the historical Pearl Roundabout a shelter which was destroyed by the authority with the help of the occupation forces particularly Saudi Arabia and the UAE. Demonstrators were forced to leave the Square after a brutal attack where many people got injured and killed.
The Pearl Roundabout now is like a military base surrounded by barbed wire and troops of mercenaries brought by the regime from several Arab countries and non-Arab.

The Bahraini people continued their struggle despite the State of Emergency, which was announced on the 15th March and lifted in June; the demonstrators escalated their daily central and regional events under fire of mercenary forces and violations of human rights.

The International Dialogue announced by the system in August failed, and now the system tries to organize parliamentary by-elections after the resignation of mass opposition MPs last February.

Due to the human rights violation in the least right to express itself, the coalition of 14 Feb revolution has decided to end every attack by the security forces.

September 23rd and 24th the days of boycott election in Bahrain are the days that the Coalition has decided to prevent repression, backed by Arab and Western.

From the principle of freedom is indivisible; we would like to tell the international media that the truth cannot be divided too. We in Bahrain are fighting against injustice system just like the other Arab countries like Tunisia, Egypt and Libya who could got out of the dark after the fall of their presidents.

Bahrain is a small island that its population does not exceed the 700 thousands citizens and more than 45 were killed and more than ten thousand injured and the number is in increase since seven month ago.

We aspire that our revolution and protests to be under your spotlight in your daily news and gain your interest in covering the return day to the Martyrs Square the Pearl Roundabout so to complete the picture of the Arab Spring.