The exhibition of “Bahrain’s Martyrs” in the holy city of Karbala, which was opened by the Coalition of 14 Feb youth revolution on Thursday, 25 Oct 2018, has witnessed a wide media coverage as the masses of visitors have took part in it. 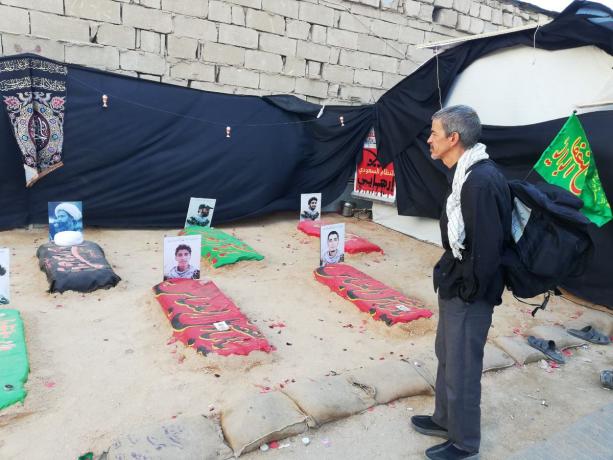 The exhibition of "Bahrain's Martyrs" in the holy city of Karbala, which was opened by the Coalition of 14 Feb youth revolution on Thursday, 25 Oct 2018, has witnessed a wide media coverage as the masses of visitors have took part in it.

Under the title "the opining of Bahrain's Martyrs exhibition" in Karbala , the Radio Chanel, Nada al-Bahrian has mentioned that the management of the Bahrain Martyrs' exhibition in Karbala had announced the opening ceremony on Thursday 25 October 2018 at 7:00 pm. It invited the visitors of Imam Hussein (p) to visit the exhibition, which will be held in the Husseini camp – Qazwainia Street.

The electronic "Manama Post" newspaper said that the coalition of 14 Feb has lunched on Thursday, 25 Oct 2018 the activities of the annual exhibition of "Bahrain's Martyrs" in Karbala with the attendance of Sayed Khamenei's representative, Asa'ab Ahil al-Haq's representatives, al-Nujabaa Movement, Sayed al-Shuhada Battalions,the Jihadist Movement and different formation of al-Hashid al-Sha'abi, and among them were the Yemeni, Hijazi and Nigerian people.

The exhibition included pictures and scenes from the 14 Feb revolution, a symbolic demonstration of the martyrs of the Husseini resistance in Bahrain, martyr Sheikh al-Nimer, martyr Imad Mughniyeh and struggler Mohsen Hajji.

Al-Alam news channel added that the representative of the Leader's delegation of the Islamic Revolution, Ayatollah Ali Khamenei, in Hajj and visitation in Iraq, Hujat al-Islam and Muslims Najafi has opened the exhibition, which witnessed on its first day a large presence of visitors to Abu Abdullah al-Hussein. Corners for images and scenes from the 14 Feb revolution was presented too.

The media center of the coalition of 14 Feb has said that the banners promoting the popular petition calling for the election of the Constituent Assembly and calls on the people of Bahrain to boycott the sham elections was suspended in the exhibition. The second day of the exhibition has witnessed large crowds of men and women, the influx of students of religious sciences from various seminaries inside Iraq in spite of bad weather and heavy rains.

The center explained that al-Khalifa regime seeks every year through its embassy in Iraq to prevent holding the exhibition under the pretext that it is harming the regime. It also calls for the suspension of the custodians, who are accused of malicious and false charges.

Al-Kawthar TV channel said that this exhibition is held every year during the Arbaeen (fortieth) visit season, where pictures of the martyrs of Bahrain who have been killed by al-Khalifa regime are displayed, and attracting visitors of Imam Hussein who express their solidarity with the people of Bahrain and support it in the option of revolution until self-determination.

Al-Ghadeer TV channel reported that Bahraini activists held an exhibition for "Martyrs of Bahrain" in the holy city of Karbala during the million-visit of the Arbaeen.

In an interview with al-Ghadeer, the activists said that this exhibition falls down on all the allegations of Al-Khalifa entity about their denial of the crimes of torture, murder and violations committed in more than seven years.

The exhibition, as described by observers is a historical proof witness of the extent of injustice to the people of Bahrain, and the extent of the media blackout exercised by the Bahraini authority against the manifestations of injustice.