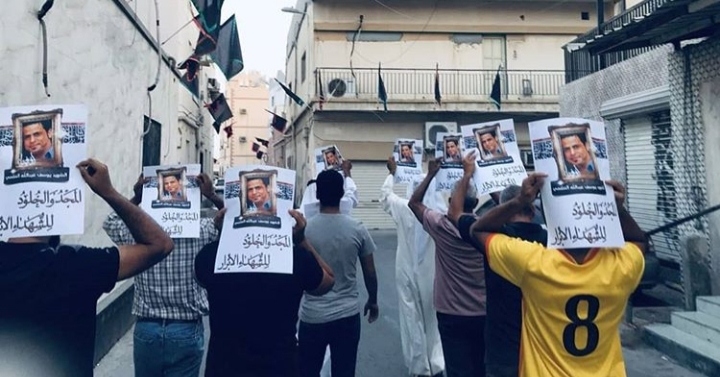 In the town of Musalla, the residents launched a demonstration in honor of the martyr "Yuseif al- Nashmi", in which they called for taking revenge upon the murderous criminals. They raised banners and flags that confirm their continuation of the martyrs' approach until achieving the goals of the glorious revolution.

Additionally, an angry demonstration took place near the mosque of Imam al-Sadiq (p), in the center of al-Diraz town, in refusal to participate in the mock elections and a victory for the leader, Ayatollah Qassim. Meanwhile, the people had forced to pray individually because of the ban on Friday prayer for the 129th week respectively.

In Karana, the demonstration of "Boycotting for the martyrs", which launched in the afternoon was attacked suddenly and brutally, resulted in the arrest of a number of citizens, including the parents of the martyrs "Ali Mushaima and Sayed. Hashim", where they have been beaten and threatened.

Furthermore, al-Khalifa gangs have submerged the neighborhoods of Karbabad with poison gas without justification.