A long way march was began by the former generations and it had summarized the slogan of sacrifice of blood and souls for the sake of the homeland’s sovereignty . 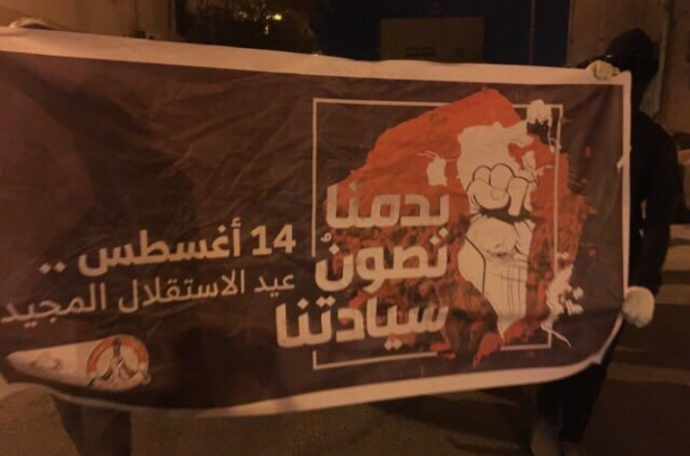 A long way march was began by the former generations and it had summarized the slogan of sacrifice of blood and souls for the sake of the homeland's sovereignty .Our people today are the people of steadfastness and patience , the people who reject all kind of occupation and hegemony of their country and their sovereignty based on this heroic march .In the midst of this ,the memory of 14 August passes through us and it is the memory that despite it carries pride and dignity for our people after the defeat of the British occupier from our land ,it reveals in another way the malice of British Administration which sought to consecrate its occupation in another manner and rooting of the dictatorial regime on the Island of Bahrain with all the word of occupation and dictatorship means .

After February ,14 2011,the literature of the revolution was established on more than one level .The literature of the British Kingdom which includes the idea that the island of Bahrain is its eternal colony .It confessed that it has no little value for its people and sticking on protecting the rulers of al-Khalifa bloody tribe in return for its undeclared sovereignty and interference in the affairs of the country

After February 14, 2011, the literature of the revolution and resistance was established on more than one level. The literature of the British Kingdom, which includes the idea that the island of Bahrain is its eternal colony, is recognized as having little value for its people. In return for its undeclared sovereignty and interference in the affairs of the country.

We are in the coalition of 14 Feb youth revolution ,and as a revolutionary opposition that resist any project might harms the sovereignty of Bahrain and the unity of our country .We send 3 important messages on the occasion of August 14 ,believing that it is the occasion of British occupation defeat .

The first message for the current British government and its ambassador to Bahrain :

No matter how you established the reality of this colonialism in its various forms through the military presence and the building of your military bases on our blessed land of Bahrain ,and whatever your media machines have produced horrific propaganda and misinformation ,you will have to understand and read very clearly the awareness of the Bahraini generation whose culture ,sprit and moral were formed to reject you and consider you as an occupying power .They see you as the first and foremost collaborators in the past and present of the al-Khalifa dictatorial regime which usurps the power and kills its people with great cruelty ,supported by your government ,intelligence and torturers .We are in the coalition of 14 Feb youth revolution will not hesitate to escalate the rejection of your occupation by all the legitimate means and resist the invaders and occupiers .

The second message for the British people :

We size the opportunity to commemorate the unfinished independence ,as the occupation of your country Britain to our country is still existed in many forms and it does tolerate the oppression and persecution of your occupying forces .That was rejected by our Bahraini people and we urge you to put pressure on your deputies and your government to formulate new policies that serve the interests of both peoples , rather than the reality of the current occupation, which our Bahraini people totally reject. Your votes at the ballot box should not be a bullet or a bomb explodes in the chest of a Bahrain citizen who refuses to occupy his country, but rather to impose a policy of supporting Bahraini people against the ruling dictatorship in Bahrain, supported by successive governments, which disrupts the real political and economic interests between the two countries and harms the friendship of the two peoples.

The third message for the great Bahraini people :

We promise you, O sons of our great people on August 14, 2018 as we promised you on every occasion, not to compromise the rights and sovereignty whatever it costs of sacrifices, we will not accept that our country is occupied under any title, and will not accept the presence of the American or British or any bases . We safeguard our sovereignty by our blood , and the will and vigor complete the march of our revolution until the end of the dictatorship rule, and we will take our legitimate right of self-determination