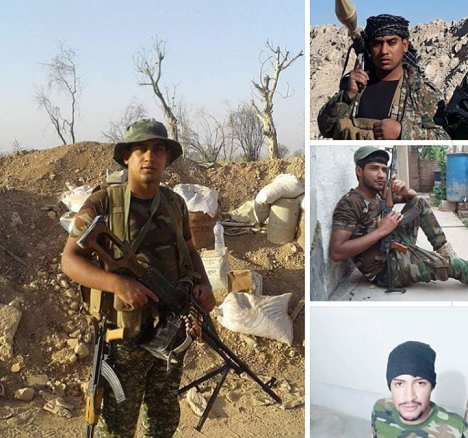 The coalition of 14 February youth revolution in Bahrain has sent its deepest condolences and sympathies to the Iraqi Hashid Shaabi's Commission(Popular Mobilization Forces ) ,especially the brothers in Hezbollah Brigades and the entire Iraqi people for the martyrdom of a group of Hashid Shaabi's heroes by an American –Zionist bombing on the 45th ,46th Brigades at the Iraqi –Syrian borders on Sunday ,June ,17,2018 .

While we mainly express our highest condolences to the families of the martyrs ,we ask Allah (Almighty ) to grant them mercy and to raise them in his vast paradise with the righteous ,prophets and martyrs and we pray for Allah to grant the wounded and injured a speedy recovery , (Allah hears all and answers all ).

Concerning the explanatory statement issued by Hashid Shaabi 's commission over this coward crime by the US administration ,and while we are condemning this heinous crime ,we would affirm the following :

First :This massacre committed by the criminal US forces on Hashid Shaabi 's heroes is a duplicate copy of the crime committed in August ,7,2017 ,where it bombed the sites of Sayed al-Shuhadaa 's brigades ,and it alleged that it thought these sites are belonging to the terrorist groups of Daish (ISIS).

Second :This criminal step taken by the US administration which caused the death of 20 martyrs and dozens of wounded, confirms that it did not stop its support for the terrorists , unveils the American false allegation in its media that it fights the terrorist groups which were founded mainly by the terrorist al-Saud regime and other pro – terrorism regimes in the Gulf region and financing them.

Third :The US –Zionist forces know very well the locations of the terrorist groups and the sites of Hashid Sh'abi, however ,they preferred to commit this heinous crime in retaliation of the victories made by the heroes of Hashid Shaabi when they fought the remnants of armed the terrorist groups in Iraq and Syria , and thwart their destructive and arrogant projects in the region .These victories do not please the criminal US administration because it failed its formula to establish an American military presence and to impose control over the Iraqi territory ,and finally ,it heightened the grieves of this administration when its bloody project in Yamen was failed and shocked by the victories of the Yemeni army and the popular committees and their achievements .

Fourth :This crime comes within the context of detracting the sovereignty of the Iraqi people and the independence of their political decision ,and that is totally unacceptable. The Iraqi people should escalate their stands that reject the continuation of any US presence in Iraq ,they should be aware that this awful crime was committed to enable the armed terrorist groups and organizations to impose their control again over the Iraqi territories and to commit more brutal atrocities against the dear innocents people of Iraq .