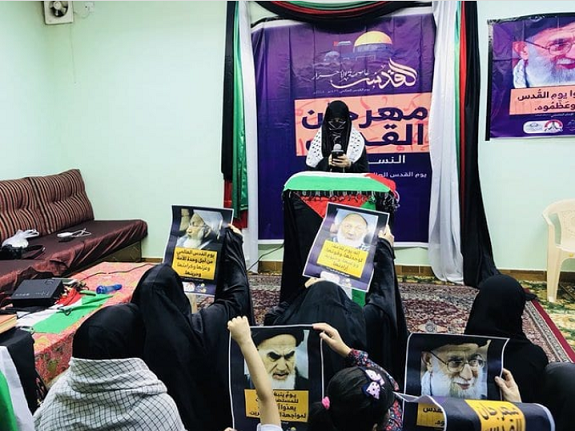 During the festival , recorded speeches were delivered and it was attended by masses of Bahraini women and women from Mauritania ,Iraq, Gaza strip, West Bank ,Yemen and Syria. Among the participants were chairman of the Yemeni human rights center ,Mrs. Amal al-Ma'akhazi ,member of the Iraqi Fatah coalition Dr. Ektifaa Muzher Abid al-Hasnawi ,head of the women council in the youth organization of al-Rafah party in Mauritania Alnuha bin al-Rajel ,Mrs. Khuther al-Shaibani from the Syrian national women federation ,the wife of the martyred leader Emmad al-Dahdooh from Gaza ,member of the Arabian and Islamic gathering to support the resistance option ,the coordinator of the Arabs women progressive union Dr. Amal Wahdan from Gaza strip .

All the speeches in this festival which organizes annually ,have emphasized that al-Quds is the eternal capital of Palestine and it is the capital of the free people .The festival was concluded with a speech delivered by the coalition of 14 Feb youth revolution.