The coalition of 14 Feb youth revolution has praised the uprising of the Bahraini people on Friday ,May 18, 2018 on the National Day to expel the US bases from Bahrain . 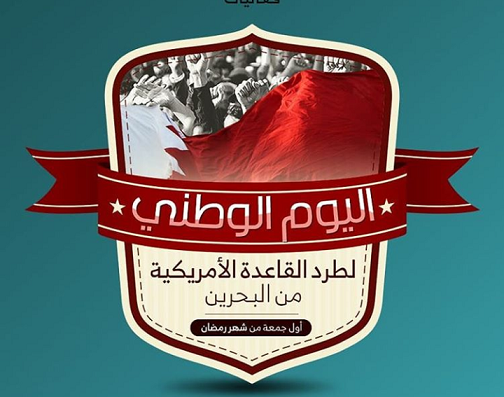 The coalition of 14 Feb youth revolution has praised the uprising of the Bahraini people on Friday ,May 18, 2018 on the National Day to expel the US bases from Bahrain .

In its statement issued Saturday ,19 May ,the coalition said that the move against this illegal presence had based on its belief that it is planning to stabilize the continuity of the dictatorial rule ,which is an impediment in front of any kind of liberation from arrogance and dictatorship and the biggest barrier in the way of the democratic transition .

It pointed out that the establishment of this military base was for the purposes of hegemony and influence in the region ,and it is not related to the will of people or their interests .The presence of this base is illegal ,and thus it is one of occupation and land usurpation titles. The facts have shown that the previous US administrations had dealt with the region as a region of supremacy , colonialism and influence ,and not for any other reason .

The coalition stressed that the new American administration is the worst administration that has ever been passed through its delusion ,arrogance and high-handedness .It disregards the international norms and the will of people ,referring to its attempt to illuminate the Palestinian cause by transferring its embassy to al-Quds . It has committed a big crime ,not only against the people of Palestine ,but also against the whole Islamic nation ,and that is a recklessness of the free world .Accordingly ,the Arab and Islamic people must awake of their hibernation and unawareness ,and be on high level of vigilance and awareness to refuse any US presence .

The statement has asked for boycotting anything belongs to America, urging the Islamic and Arab countries to take serious real positions that represent the peoples in the region and their aspirations over freedom and independence. It urged the peoples who are under the control and influence of the US through its bases ,to activate all means of resistance to expel it out of their land ,treating them as invaders and occupiers ,rejecting the normalizing regimes agenda with the Zionist entity and these which are in accord with the latest US decision and compelling them no to be yield for the American –Zionist project of hegemony.

The coalition emphasized that the National Day to expel the American Base from Bahrain ,which was launched on the first Friday of Ramadhan every year is the way of freedom and the end of the long years of hegemony and enslavement . "we are very sure that the region will have prosperity and peace when it will be able to expel the military bases from our nations and holy land ,when the last soldier leaves " the coalition added