On Friday, May 18,2018 ,on the National Day to expel the US base from Bahrain ,our steadfast Bahraini people have revolted against its illegal existence in the belief that it was working to stabilize the dictatorial regime . 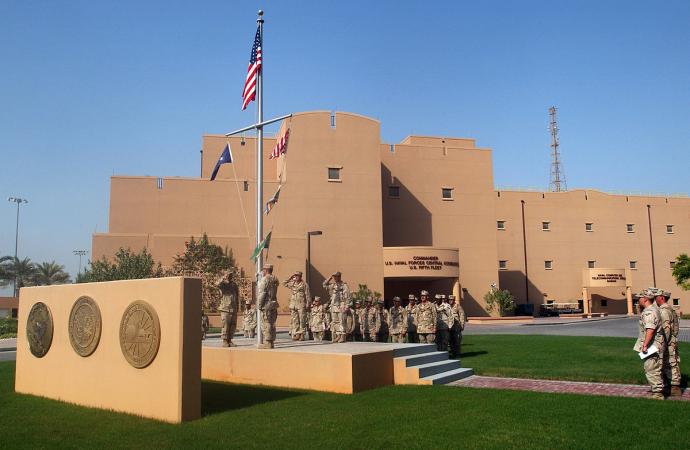 In the name of Allah ,the merciful and most compassionate

On Friday, May 18,2018 ,on the National Day to expel the US base from Bahrain ,our steadfast Bahraini people have revolted against its illegal existence in the belief that it was working to stabilize the dictatorial regime . It is an obstacle in the way of any kind of liberation from the oppression and dictatorship and the main impediment in the process of the democratic transformation.

This military base was founded for the purposes of hegemony and influence in the region and it has nothing to do with the popular will and the interests of the people, but instead, the existence of this base has no any legitimacy and accordingly it is one of the occupation and land usurpation titles .

The facts have shown that previous American Administrations were dealing with our region an area of hegemony ,colonialism and influence ,and not for any other reason .

The new American administration is one of the worst administrations that have ever seen through its arrogance and high-handedness. It is disregarding the international norms and the will of people, and today it is trying to wipe up the Palestinian question by transferring its embassy to al-Quds . Thus ,it is committing a big crime not only on the Palestinian people only ,but also on the Islamic nation which is a disregard of the entire world .

The Arab and Islamic people must waken of its inattention and hibernation ,and everyone should be aware and vigilant enough to reject any US presence and not to allow America to remain free to do what it wants on our land ,nation and sanctities .

We are , in the coalition of the 14 Feb youth revolution ,and while we are launching the project of the National Day to expel the American base in Bahrain on the first Friday of Ramadhan every year , we emphasize that this project is our way to get freedom and to put an end to long years of hegemony and enslavement .

We are confident that our region will enjoy security and prosperity when it can expel the military bases from our nations and holy lands until the last US soldier leaves .

We call for a total boycott to everything American ,and call upon the Islamic and Arab nations to take serious and genuine actions that represent peoples in the region and their aspirations for independence and freedom . We urge the people under the American domination and control through its bases to activate all means of resistance to expel it from our holy nation and to consider them as invaders and occupiers .

We also urge all the free and honorable people of our Islamic nation to disobey the regime which normalized with the Zionist entity and accepted the latest US decision ,compelling them not to subdue to the American-Zionist project of hegemony and dominance