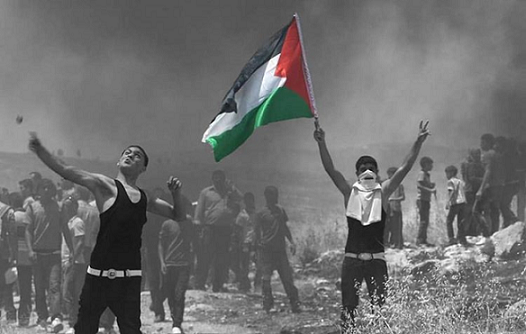 The revolutionary powers in Bahrain have praised the resistance of the Palestinian people on the 70th anniversary of the setback which is corresponding this year with exceptional conditions such as the US persistence to reveal its enmity to the oppressed Palestinian people .The US has transferred its embassy to the occupied al-Quds in open defiance and support by the usurper Zionist entity with unofficial Arab betrayals and unprecedented normalization by some gulf and Arabian governments .

In its statement issued on Tuesday 15 May 2018 ,the powers (the coalition of 14 Feb youth revolution ,the Islamic al-Wafaa movement ,the Islamic action movement and Haq movement ) have stressed that the stand of the Zionist- like ,the minister of al-Khalifa ministry of foreign affairs Khalid al-Ataiya does not represent the people of Bahrain ,but it only represents the cabinet of the tyranny Hamad and his Zionist agents of al-Khalifes groups .

The statement made it clear that the stands of the Zionist –like Arabs are coming within a series new crimes by the Zionist entity against Palestinian people and the demonstrators who are taking part in the million's return demonstration .It discloses the extent of their betrayals ,baseness and crimes on the people of Palestine who have lost hundreds of martyrs and thousands wounded .This people have proved through their resistance and defiance in front of the arbitrary Zionist occupation that they are passing through a new stage of resistance which will fail all the attempts that seek to end the Palestinian cause ,and it will expose all the traitors who are gambling with al-Quds and al-Aqsa .

The opposed revolutionary powers in Bahrain called for taking every means of consolidation with the people of Palestine ,stressing on the necessity of preparation for a wide and exceptional participation in the al-Quds world day's demonstrations and its activities as a clear response that reveals the actual stand of the Bahrain people who are rejecting the normalization and consolidate with the Palestinian people until the liberation of all the Palestine's soil from the Zionist occupation