The chairman of the 14 Feb coalition advisory council has praised the Bahraini people who are fighting and resisting at the combat fields ,noting the constant revolutionary presence of people in the squares and fields . 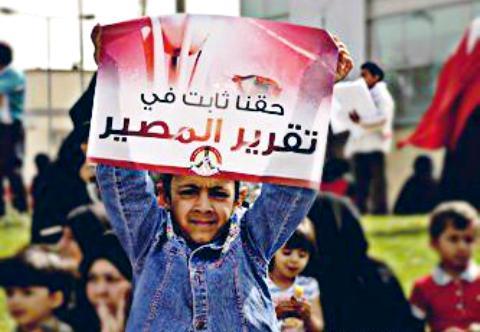 The chairman of the 14 Feb coalition advisory council has praised the Bahraini people who are fighting and resisting at the combat fields ,noting the constant revolutionary presence of people in the squares and fields .

In a speech to the Bahraini people on the 7-anniversary of the glorious revolution, the chairman of the advisory council mentioned as saying that "our dear ,beloved and kind people ,you have written the epics with your patience ,painted the most beautiful pictures with your steadfast ,wrote the most beautiful examples with your sacrifices. I will kiss your hands which hold the victory against your enemy .I will kiss the soil you walk on it .The land won't forget your prostrated heads on it . You have proved with your steadfastness and stand in front of repression machine ,threats and intimidation that you are keening to meet Allah and waiting for his best rewards .You have struggled for the sake of your conscience, religion ,freedom and right principals. You had never been affected by a blamer as you depended on Allah .Be patient our struggling people ,your right won't denied ,Allah shall be your helper in your soil .The believers will be the examples ,the owner of right and the pious".

The chairman of the advisory council hailed the Bahraini women who have took part extensively in reviving the seventh revolution anniversary ,notifying on the vital role of women in the revolution ,sending graduate and thanks to them for their presence in the fields and squares and their standing with their brothers and sons .

He also sent a message to the raising generations of youth in Bahrain including the students of the schools ,institutes and universities ,appreciating their response to the steps of civil disobedience and their strike of study on Wednesday 14 & Thursday 15of Feb .He counted the 14th of Feb as one of Allah's day and it will be decided as an official holiday

Over the response of the shops' owners with the civil disobedience ,the chairman of the advisory council said "form our responsibility position ,we would like to send our greetings to the people of Bahrain ,the merchants ,the owners of stores ,the owners of industries . We tell them that you have chosen the biggest profit when you support your free country .while you closed your stores and shops ,you have showed a civilized declaration of your disobedience and sympathy with your struggling brothers ".

The chairman of the advisory council of the 14 Feb coalition concluded his speech as saying that the people of Bahrain have the right of political self-determination ,stressing that the victory and relief is close to people of Bahrain .Steadfast ,resisting ,breakable ,patient and sacrificed people like the Bharani people will only be won and they will get their legal rights eventually ,he added