Since the terrorist Khalifies have took over the purified land of Bahrain , their bloody attack which had launched by the terrorist Ahmed bin Mohammed Bin Khalifa in 1782 on the island of Sitra nightly.. 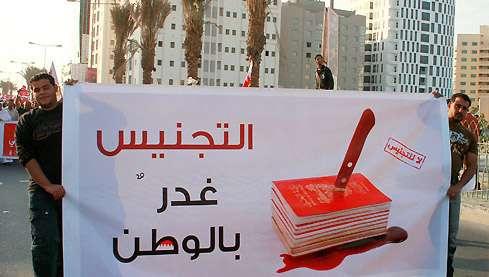 In the name of Allah(the God) ,the merciful ,the most compassionate

Since the terrorist Khalifies have took over the purified land of Bahrain , their bloody attack which had launched by the terrorist Ahmed bin Mohammed Bin Khalifa in 1782 on the island of Sitra nightly , looting the wealth of its people and committing a mass massacre that killed many of its original inhabitants and until the rule of terrorist Hamid Bin Khalifa , the black days are still hovering in the sky of our beloved Bahrain. The crimes of the Khalifies and their despicable plots in the dark tunnels have never end. After these plots became clear to the public in broad daylight, they showed the real ugly image of the rule of the Khalifies since they occupied Bahrain.

The dictator( Hamid) has accomplished what his ancestors have begun through their brutal crimes .He has committed during his rule a big crime and a high treason against the country when he brought the foreign mercenaries and employed them in the military systems ,giving them the nationality without deserve within the political naturalization project which aims at changing the Bahraini demography .

The political naturalization crime has shed light on the high born Bahraini people and their legal rights.

This crime has deprived them from getting their noble breakthroughs in their country and the country of their fathers and grandfathers .It has exhausted the public budget and caused with other means the raise of gross debit.

The clear evidence of this deterioration is the poor housing ,health and education services as well as the high rate of unemployment. This high treason has caused political, economic ,social and security crises in the country .That led our people with all its sects and varieties to refuse this dangerous cancer and its destructive results on different levels which have been founded by the criminal regime throughout the last years .The citizens were the victims by obliging them to pay for this crime through taxes to repair the economic deficiency of the Khalifa's entity as a result of what his hands done towards the country and the believers .

In addition to the crime of political naturalization which allowed to so many mercenaries to be employed by the regime whose number have reached about thousands of criminals and murderers , among them the men of the dead tyranny Saddam Hussein .The dictator Hamid has added another crime to his criminal account when he targeted the noble citizens and denaturalized their citizenships because they have opposed his devastative policy.

The magic have turned over the magician after the people of the Arab gulf states have recognized the hazards of the naturalized individuals on them .That matter has pushed the representative of the Khalifa's gangs to comply with the orders of Riyadh and that what has emphasized the lack of Khalifa's entity to its political decision and its flagrant subsidence to the Saudi terrorist regime.

We ,the coalition of 14 Feb youth revolution and while we confront and give our hands to other citizens from both sects (Shiites and Sunnis) and to our neighboring people in confronting the danger of political naturalization and its catastrophic impacts politically, economically ,culturally , and socially, are stressing that the subjection of Khalifa's entity to the Saudi regime's orders and ignoring the bad effects on the original Bahraini people as a result of the political naturalization crime. These acts are emphasizing the hostile behavior of the occupied Khalifes against the highborn Bahraini citizens from both sects. It also enhance the right option of continuing the revolutionary move until toppling the Khalifa's Junta and enabling the steadfast the Bahraini people to have the right of self-determination and choosing their new political system that fulfill their ambitions and legitimate expectations .