The 14 February youth revolution coalition has pointed out that the malicious plot of the American president Trump is demanding the support and backing of the resisting choice. 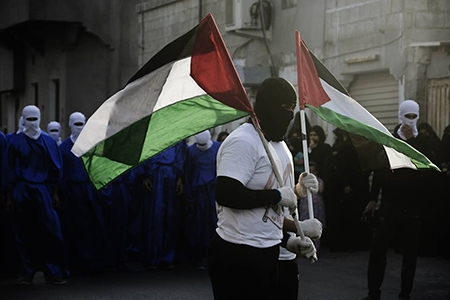 The 14 February youth revolution coalition has pointed out that the malicious plot of the American president Trump is demanding the support and backing of the resisting choice.

It also needs the unity of Islamic and Arabian countries as well as the cohesion with the resistance's axis and the opposed Palestinian people in is blessed uprising .

The final declaration of the (Al-Quds is the capital of Muslims ) marches which have been carried out at the Bahraini cities and towns on yesterday,8 December 2017 has revealed that the entire world has deemed the criminal move made by the head of the biggest evil in Washington Donald Trump and his wicked conspiracies against the land of Al-Israa and Al-mairaj ,the first of the two Khiblas in the occupied Palestinian territories in Al-Quds Al-Shareef ,and recognizing it as the capital of the usurper Zionist entity.

The statement has made it clear that the resisting and proud people of Bahrain are keeping on their continuous revolution in the fields and squares.

Despite of their wounds and pains ,they have never forgot the three main issues of the Islamic and Arabian nations of the lovely Palestine and they would never deny or abandon it.

They are presenting in the fields now to express their solidarity with the Palestinian people who are resisting the occupied entity.

Their honest stand toward this just issue has been shown through their furious demonstration which have been held to affirmed that Al-Quds is the capital of all Muslims.

The coalition has denounced in its statement the shameful and disgraceful stand adopted by the ( Zionist – believers),the Arabian regimes and first of them is the Saudi terrorist regime which has smoothed and facilitated the issuing of this criminal and hostile decision through its approval and foolish policy .

The final declaration of (Al-Quds is the capital of Muslims )marches has reaffirmed that this malicious conspiracy is requiring submit a support and backing to the resistance's choice.

It also needs the unity of Islamic and Arabian lines and the axis of resistance's cohesion with the Palestinian people in its blessed uprising until getting rid of the founding Zionist entity without return.