In the name of Allah ,the merciful and the most compassionate 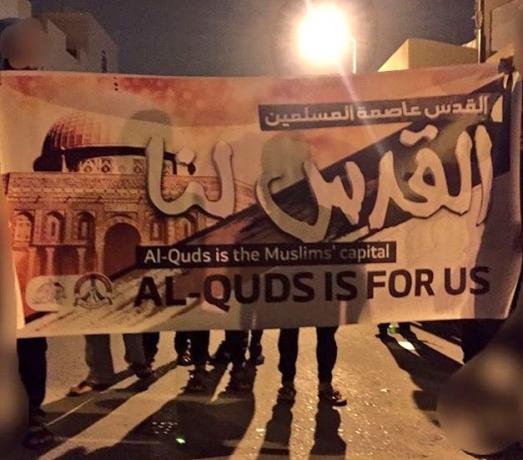 In the name of Allah ,the merciful and the most compassionate

The whole world has witnessed the criminal step of the biggest devil administration's head in Washington Donald Trump and his wicked plots over the land of Al-Israa and Miahraaj(the journey of prophet Mohammed to Al-Aqsa mosque),the first of the two kiblah in the occupied Palestinian land of Al-Quds Alshareef and recognizing it illegally as the capital of the occupied entity .

The resisting and steadfast Bahraini people whom we send a respect and honor greeting are still resisting in the fields and squares with their continues uprising. Despite of their wounds and pains ,they have never forgot the three main issues of the Islamic and Arabian nations of the lovely Palestine and they would never deny or abandon it . They are presenting in the fields now to express their solidarity with the Palestinian people who are resisting the occupied entity .Their honest stand toward this just issue has been shown through their furious demonstration which have been held to affirmed that Al-Quds is the capital of all Muslims and the eternal capital of Palestine .

We are in the coalition of 14 February youth revolution are denouncing the shameful and disgraceful stand of the Zionist -like Arabian regimes and first of them is the Saudi terrorist regime which has smoothed and facilitated the issuing of this criminal and hostile decision through its approval and foolish policy without any consideration to the consequences of this awful step and its repercussions .

We are stressing that this malicious conspiracy is requiring to provide support and backing up of resistance's choice .It also needs the unity of Islamic and Arabian lines and the cohesion of resisting axis with the Palestinian people in their blessing uprising until getting rid of the founding Zionist entity decisively .Allah shall successor you our dignified Bahraini people and the people of resistance in Palestine ,no victory only from Allah .