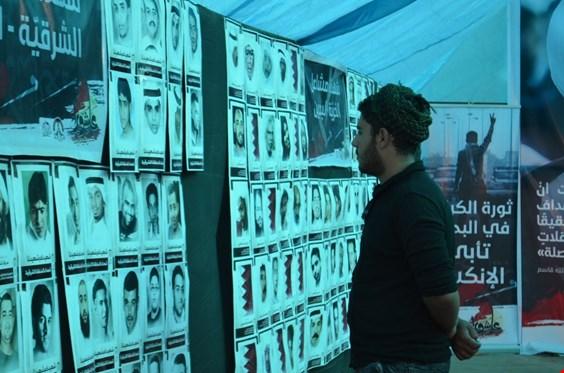 In a reference to the declaration issued by the Bahraini embassy in Baghdad which had criticized the holding of the conference and the Bahraini revolution exhibition in holy Karbala city during the Arbaeen ceremony, the leading figure of the 14th Feb youth revolution coalition Esam Almanay has said that this declaration is not going to affect in any way the solid relations between the Bahraini revolution coalition and the Iraqi people who are representing by resisting groups, political movements and high level leaders in the Iraqi government.

In an exclusive statement to Al-mayadeen Net, the leading figure of the 14th Feb youth revolution coalition has revealed that many coalition's leaders have received phone calls from Iraq’s Hashd Al-Sha’abi (public Mobilization Units) leaders and senior officials at the Iraqi government where they reaffirmed their support to the Bahraini fair issue. They also have refuted the Bahraini government allegations and its accusations of the 14th Feb coalition of terrorism maliciously.

The Bahraini embassy in Baghdad has expressed its disappointment for holding the conference and the pictures exhibition in Karbala and it alleged that it would offense the country.

A press report has revealed lately that the embassy has asked the Iraqi related authorities to identify the organizers of this conference although it holds every year. The Bahraini ambassador has also called repeatedly on the Iraqi officials to refrain from holding this conference because it might harm the Iraqi – Bahraini relations.

It is to mentioned that the coalition of 14th Feb youth revolution has held the Bahraini martyrs exhibition on Monday in Karbala city. The exhibition was attended by the head of Iranian leader's delegation and representatives of Iraqi resisting groups.

The exhibition had included images of the 14th Feb youth revolution 2011,pictures of the martyrs who died for the sake of Bahraini issue, pictures of several wounded and injured people, methods of oppression used by the regime to restrain the uprising as well as pictures of martyrs from Syria, Iraq, Yemen and Lebanon.