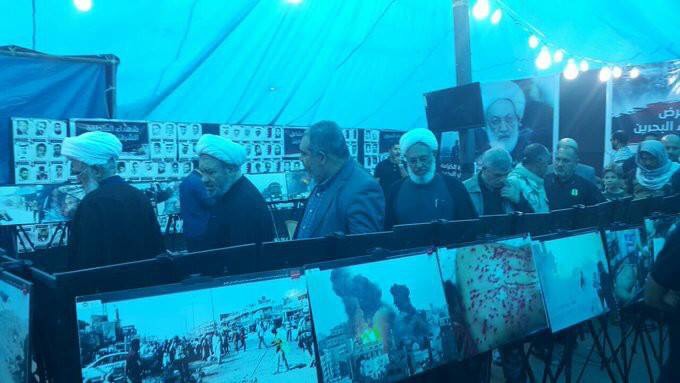 After several weeks of preparations and tremendous work, the exhibition has opened by the chief of the Iranian revolution leader delegation (Ayah Allah Sayed Ali Khamenei) , his excellency Hujha of Islam and Muslims (Sheik Najafy Rohani) with the presence of many key figures and vast numbers of Arbaeen's visitors.

There were many pictures of the 14 February, 2011 revolution, its honored martyrs and wounded revolutionists in this exhibition. It also has documented the ways of persecution which have been used by the Khalifa's entity and the Saudi occupier in their oppression against people. The exhibition has included the martyrs' images of the Eastern area of Hijaz and the martyrs of Yemen , Syria, Lebanon and Iraq as well.

Meanwhile, a channel on the social media site (Telegram) has been established to direct and facilitate the access of the visitors to the exhibition. There was also a media coverage which included advertisements and banners and the demands of some activists and journalists on the necessity of attending this event as a reward for those martyrs