With a repulsive arrogance and a continuation of the sectarian oppression, the Khalifa’s mercenaries are persisting its assaults on the Hussein’s rituals all over Bahrain. 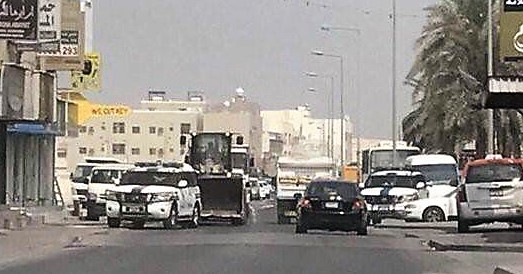 With a repulsive arrogance and a continuation of the sectarian oppression, the Khalifa's mercenaries are persisting its assaults on the Hussein's rituals all over Bahrain.

The mercenaries groups have attacked on Monday, 18, September 2017 the Hussein's rituals in the capital of the revolution town(Sitra-Wedyan) and they had teared, missed and broken these rituals deliberately.

During this time, the 14th Feb youth coalition has called people in Bahrain to resist the Khalifa's attacks on these Ashura rituals and Hussein's memorials activities with a Hussein's spirt.

The coalition pointed out in its urgent declaration to the Bahraini revolutionary people on Sunday, 18,September 2017 that the Hussein's memory day in Ashura is still continuing throughout the history in the face of the tyrants of the age.

The memorials of these Hussein's rituals are holding only to revive the concepts of resistance and victory against the Yazidi tyrants .

The coalition also called the Hussein's people to meet the call of resistance and durability at the (Hussein's Friday) on Friday, 22,September 2017 and to make the 11th of Mahram as a day of anger and rejection of any attack on the Hussein's holy rituals.