The 14TH Feb Youth revolution coalition in Bahrain are denouncing the genocides
»against Muslims people of Rohingya in Myanmar «Burma. 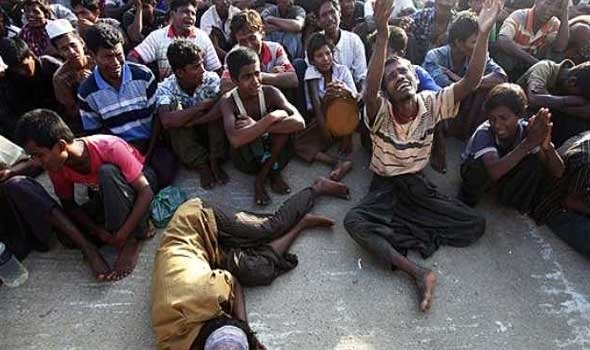 In the name of Allah (the God), the merciful, the most compassionate

The 14TH Feb Youth revolution coalition in Bahrain are denouncing the genocides against Muslims people of Rohingya in Myanmar (Burma).

The crimes have caused the death of thousands innocents people and left hundreds thousands of Muslims homeless.

The coalition has condemned the silence of the world community and human rights announcers towards these horrific atrocities.

The Islamic minorities in Myanmar are the most affected people in the world who has suffered from many genocides by the Burmese regime.

The Burmese government has connived with some world countries for the sake of their corresponding economic interests as well as the western and European countries which are calling for human rights.

This adoption can only be achieved within its criminal and destructive projects and its wicked relationship with the Zionists entity which involved in providing weapons to the Burmese government.

It was a partner in this crime and it continued its bloody genocides against Burmese Muslims, so that these crimes are taking support from the powerful countries of the world. .

The crimes of oppression and genocides against Muslims in Myanmar are the similar to the crimes of Saudi family against the followers of Prophet Mohammed (PBUH) in Alhajaz land and especially in Awamiyha.

These crimes and over atrocities of sectarian oppression are totally rejected and the people of the world are nit going to keep silence.

We are, the 14th Feb Youth revolution coalition are calling all the Islamic people, the Islamic countries and the influential big countries to intervene and cease the bloody genocides against Muslims in Myanmar.

We demand the lived conscience people to take their moral and human responsibly towards these horrific and terrorist crimes.