The Youths’ Coalition of February 14 Revolution said that the new US ambassador to Bahrain out-speaks hostility to the people and exercises political immorality. 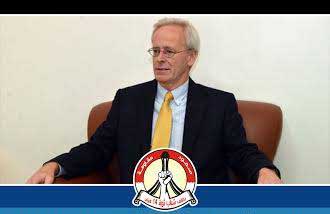 The Youths' Coalition of February 14 Revolution said that the new US ambassador to Bahrain out-speaks hostility to the people and exercises political immorality.

This was according to a press statement issued by the coalition after remarks of the US ambassador in Bahrain, the statement added: it was not surprising the statement of the new US ambassador in Bahrain «William Rubak» in which he revealed his outright hostility to people of Bahrain and to their glorious revolution, as well as his full support for his tool presented in the dictator entity of Al Khalifa, and supporting them repressing, abusing and violating public freedoms and committing crimes that violate a all international treaties on human rights policy.

The Coalition stressed that the US administration's policy was and still sick of double standards and the adoption of the principle of political immorality toward vulnerable peoples.

In reference to the recent statements by the US ambassador Coalition said: The beginning of the diplomatic journey of the new US ambassador in Bahrain is clearly hostile against our oppressed people, not only he frankly lied and clowned about what he called the «People's broad participation in the parliamentary elections», which was boycotted by the vast majority of our people, but he went away in flattery and praising the role of the dictator Hamad, who committed during the past four years, the worst of gross violations of human rights, shedding the blood of unarmed citizens, demolishing mosques and violating sanctities ,who did not let ugly offense without committing it , then comes this daft US ambassador after all these black records of crimes, and talks about the alleged reforms carried out by the dictator Hamad and they deserve great praise!

The coalition said in a statement: We are in the Youths' Coalition of February 14 Revolution as condemn hostile remarks of the American ambassador, «William Rubak», which evaded right and truth, we affirm that our people are determined to continue the revolution until achieving lofty goals, and establishing a new political system that meets the aspirations of people according to the outcomes of the results of the referendum which took place in November last year. مصدر : The Youths' Coalition of February 14 Revolution said that the new US ambassador to Bahrain out-speaks hostility to the people and exercises political immorality.