Thee Youths’ Coalition of February 14 Revolution stressed that despicable and cowardly bombings in Sanaa reveal the deep bottom Al-Saud regime has fallen to. 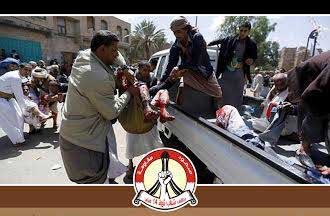 Thee Youths' Coalition of February 14 Revolution stressed that despicable and cowardly bombings in Sanaa reveal the deep bottom Al-Saud regime has fallen to.

That was mentioned in a press statement issued by the coalition last Saturday, 21 / March 2015, explaining that despicable bombings which afflicted civilians during the prayers in two mosques in the Yemeni capital Sanaa, and preceded by the assassination of Professor Abdul Karim al-Khaiwani, reveal deep bottom Saudi regime and its Daeshi tools in the region declined to, especially after their successive losses in Iraq, Syria and Bahrain.

The Coalition announced the condemnation of this despicable crime calling on Yemeni people to unite against the enemies of Yemen, especially the bloody Saudi regime, which no good is hopped from, and which is continuing plunging the region with further bloodshed and mass sectarian fighting.

At the end of its statement the Coalition consoled martyrs families of the brotherly people of Yemen, who paint with their pure blood the independent future of their country, that enjoys the sovereignty of the national decision, away from the guardianship and subordination.