The coalition of February 14: Saudi regime works mischievously so Yemen would be neither an effective nor a strong state. 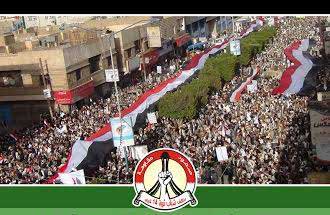 The youths’ Coalition of February 14 Revolution has stressed that conspiracies of both, Saudi regime and US Administration towards the Yamane revolution would doom to failure.

In its statement issued last Saturday on recent events in Yemen, the coalition said: The size of the Saudi interventions in the affairs of Yemeni people has become clear, as this imperious regime that came from the eras of darkness and is run by an outdated obsolete mentality is seeking to destroy Yemen; people, land and institutions as it did in Bahrain by invasion, corruption and destruction, and as it separated terrorism and assassination in all of Syria, Iraq, Pakistan, Libya and other more, and today here it is, works mischievously so Yemen would be neither an effective nor a strong state that owns its free national sovereign decision, but to be a weak, servile and loose will andindependencestate where its people live in misery, poverty and suffering.

The statement declared that the accelerated events in Yemen are approving that the revolutionary committees are in their right way to accomplish goals of revolution, especially after the constitutional declaration that issued by a united national popular volition. In contrast comes the childish movements of Saudi Regime with a shameless and aggressive American covering against peoples of the region, through transforming their embassy and embassies of states following them to Aden in preparation to announce it a temporary capital of Yemen, as a desperate attempt to divide the country, stir up sedition, and as a threat of starving people and inciting to internal fighting amongst people of Yemen.

At the end of the statement, the coalition greeted Yemeni people for their patience and steadfastness in the face of the external conspiracies that are plotted against their interests, especially their steadfastness against the Wahabi Saudi regime and the US Administration. The coalition as well announced that it hails revolutionary committees when they took the crucial decisions that protect the achievements of the revolution and repel the blatant foreign interventions. مصدر : The coalition of February 14: Saudi regime works mischievously so Yemen would be neither an effective nor a strong state.