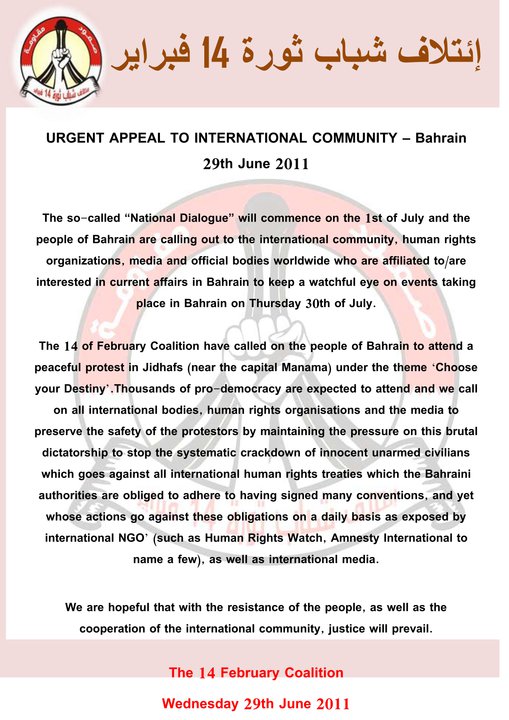 URGENT APPEAL TO INTERNATIONAL COMMUNITY – Bahrain 29th June 2011
The so-called “National Dialogue” will commence on the 1st of July and the people of Bahrain are calling out to the international community, human rights organizations, media and official bodies worldwide who are affiliated to/are interested in current affairs in Bahrain to keep a watchful eye on events taking place in Bahrain on Thursday 30th of July.

The 14 of February Coalition have called on the people of Bahrain to attend a peaceful protest in Jidhafs (near the capital Manama) under the theme ‘Choose your Destiny’.Thousands of pro-democracy are expected to attend and we call on all international bodies, human rights organisations and the media to preserve the safety of the protestors by maintaining the pressure on this brutal dictatorship to stop the systematic crackdown of innocent unarmed civilians which goes against all international human rights treaties which the Bahraini authorities are obliged to adhere to having signed many conventions, and yet whose actions go against these obligations on a daily basis as exposed by international NGO’ (such as Human Rights Watch, Amnesty International to name a few), as well as international media.
We are hopeful that with the resistance of the people, as well as the cooperation of the international community, justice will prevail.